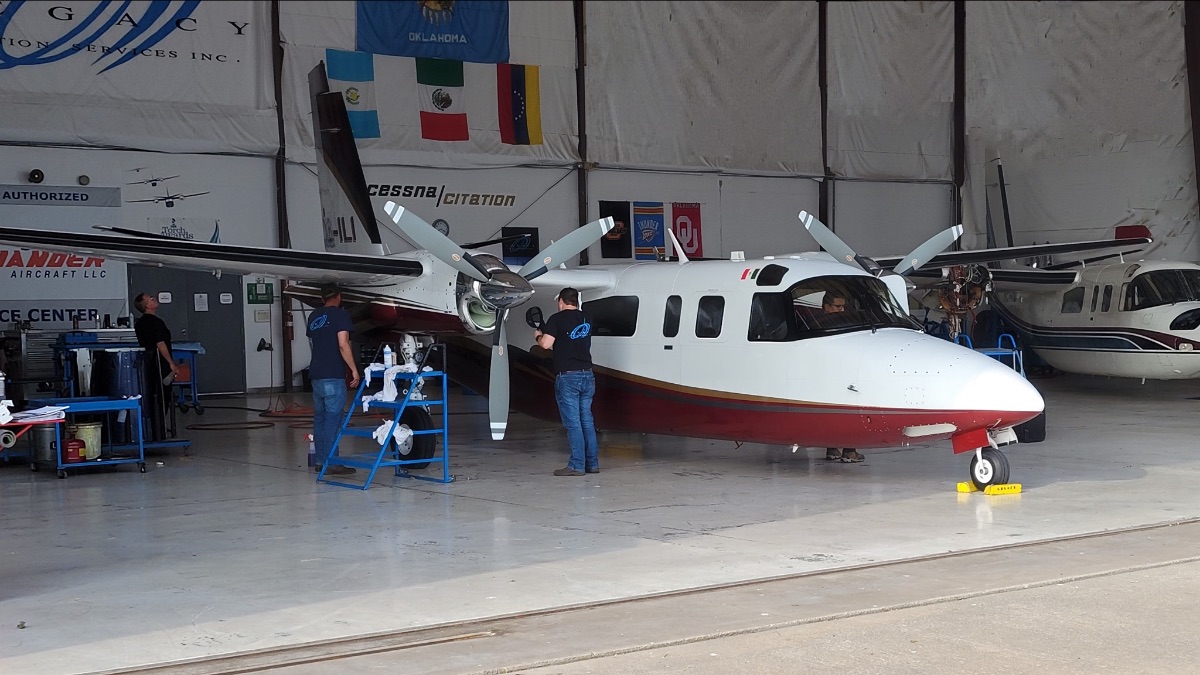 November has been a busy month for Twin Commander Factory Authorized Service Center Legacy Aviation Services. The Oklahoma City-based facility has worked on 11 different Twin Commanders over the past two weeks, with no signs of slowing down. Legacy’s RJ Gomez said the customers had come in from all over North America, including three from Mexico, and others from the West Coast, New York, Florida, and Arizona. Gomez attributes the recent success to Legacy’s central location, their reputation and expertise in maintaining the airplane, and their on-site hydraulic component repair and overhaul facility. The company also stocks an extensive array of Twin Commander parts, which makes 150-hour inspections faster and more efficient. “We’re serving our customers well from our in-house parts inventory,” he said. “And we’re doing our best to promote Commanders all over the world.” 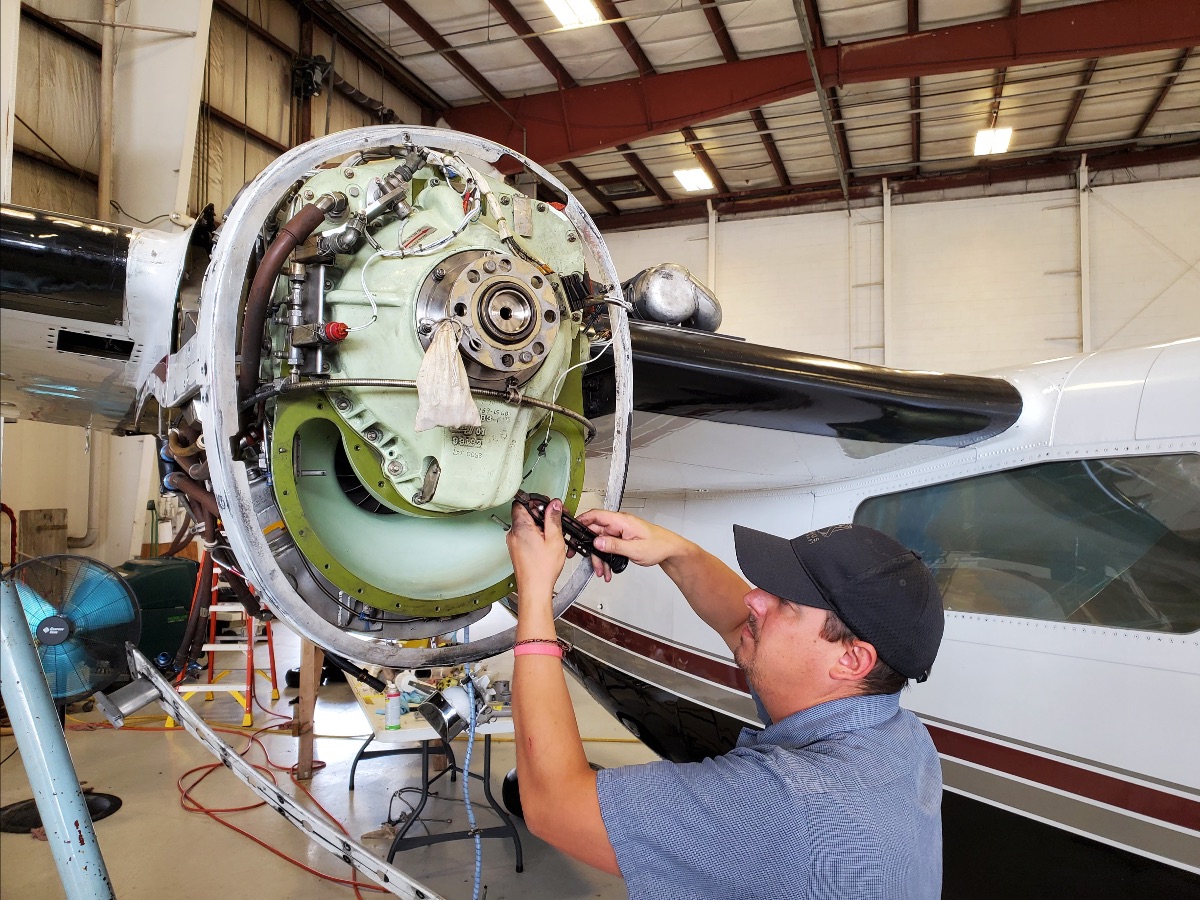 Owners and operators often lament that there is a lack of specialization in aviation, especially amongst shops. Technicians are generalists who don’t fully understand the airplane and how to troubleshoot problems, the thinking goes. That’s why the Twin Commander Factory Authorized Service Center Network is such a compelling resource, and why Byerly Aviation is a great example of how institutional knowledge and a focus on serving a specific community can raise the bar. The privately owned full-service FBO has been involved with Twin Commanders for nearly 70 years, and the commitment continues today. CEO Scott Welch is an accomplished pilot and is passionate about the future of the company, and serving Twin Commanders owners and operators. “There’s never been an aircraft made to replace the Commander,” he said. The airplane still makes up 80 percent of Byerly’s maintenance business, and he doesn’t see that changing. “We’re Commander people.” You can read the full interview and much more, in the latest Flight Levels Online. 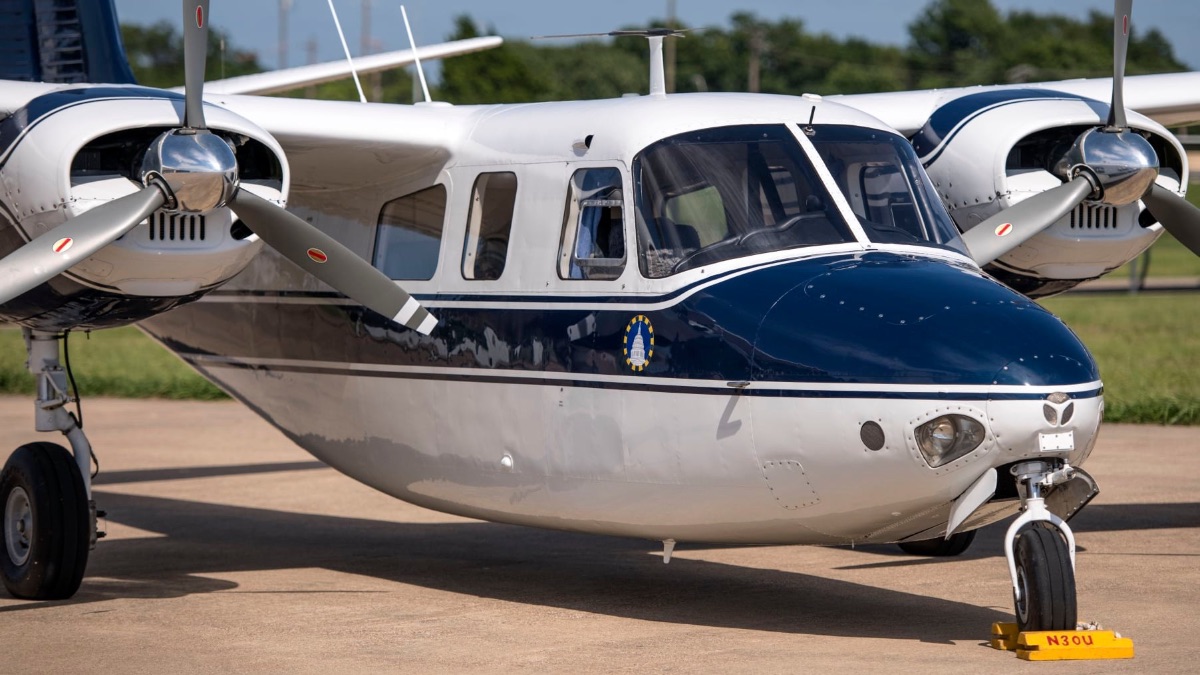 Every Commander has history, but only one can say it flew a president. Dubbed Ike’s Bird, a Twin Commander L-26B now owned and operated by the Commemorative Air Force (CAF), was used by President Dwight Eisenhower to reach his farm in Gettysburg, Pennsylvania. The airplane, which was restored a few years ago, was asked to help celebrate the recent seventy-fifth anniversary of the Air Force at Andrews Air Force Base in Maryland. Andrews is of course home to the 89th Special Missions Air Wing, the unit that operates a fleet of executive aircraft, including the Boeing 747s that currently serve as Air Force One. The wing operated Ike’s Bird as an executive transport from 1955 to 1960, and was one of a handful the Air Force ordered for the job. Since Eisenhower was a pilot, he was known to personally fly the airplane to and from the farm. The CAF owns and operates the only flying example of an L-26B used by the unit, but others exist in museums. 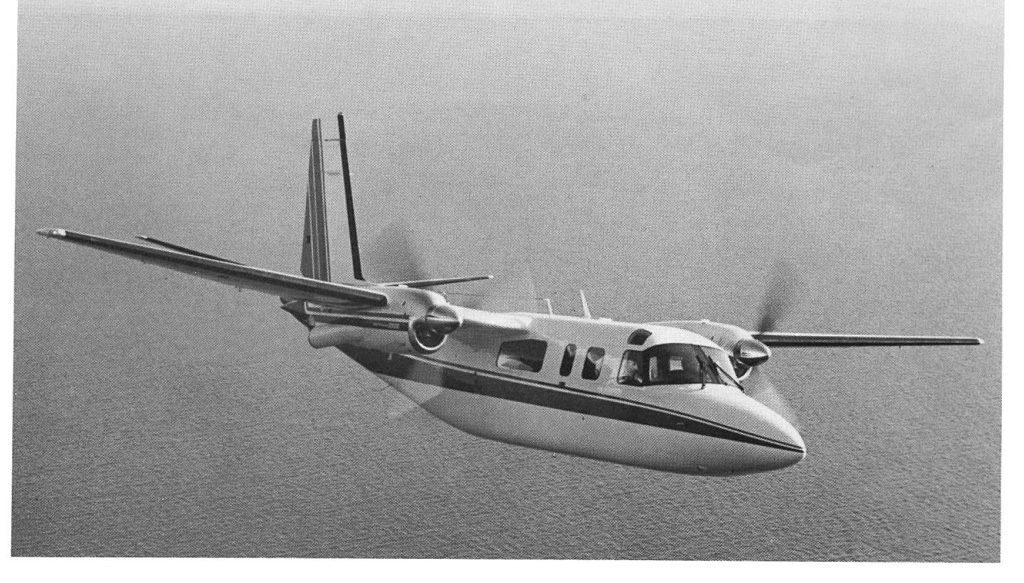 Turbine engines, a large picture window, and a shorter wing. All these are clues that can help narrow down the choices for this issue’s Name That Model, but the most important detail can’t be seen in the photo. Yes, we know it’s cheating, but even so,

Can you name that model?

As one of the only privately owned full-service FBOs at a large airport, Byerly Aviation maintains a unique position in the market. And they got there in part by focusing on Twin Commanders. As one of the most experienced Twin Commander Factory Authorized Service Centers, Byerly brings together its long history of selling, servicing, and overhauling every model of Twin Commander to benefit operators and bring value to the fleet. In the latest issue of Flight Levels we sit down with Scott Welch, the pilot turned turn-around specialist who helped inject new life into the business during the economic downturn of the early 2000s. Welch is all-in on Twin Commanders and sees serving the community as integral to the future of the business. The conversation with Welch is just the beginning. In the latest issue you can find stories on new faces in the community, how to pick one speed to increase proficiency, reminders about engine service requirements, a trip to Europe, and much more. Check out the latest issue online. 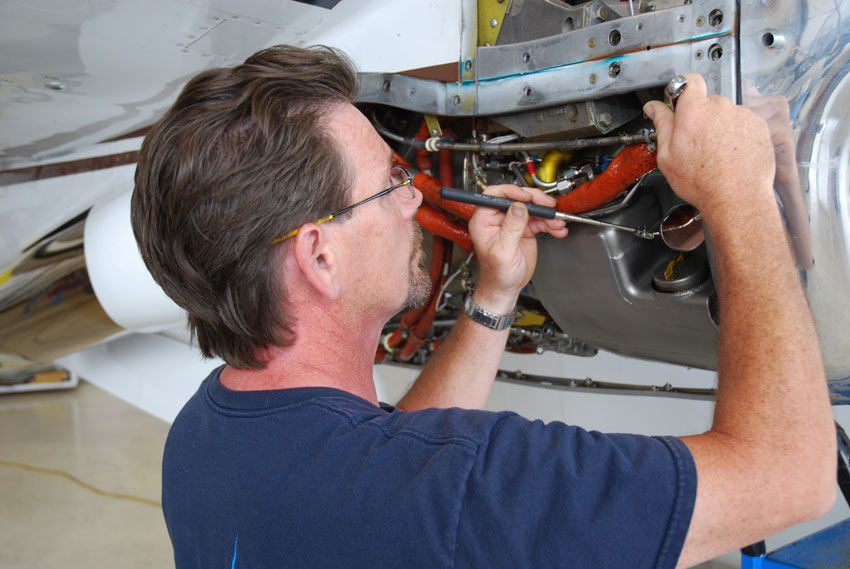 Maintenance management is a fun and challenging part of the owner/operator experience. Keeping proper records is only one side of the equation. Pilots and technicians must also be sure they are complying with the latest guidance from the manufacturer. This can come in the form of flight manual supplements, service manual updates, service letters, and more. Twin Commander Aircraft maintains a list of current service bulletins, service letters, airworthiness directives, and all other required maintenance and service information. Head to TwinCommander.com and click on Technical Resources under the Ownership menu, or scroll all the way down to “Resources” in the footer of the website to see all the technical documents available. To subscribe or order single documents, reach out to your preferred Twin Commander Factory Authorized Service Center. The parts department will be happy to guide you through the process. 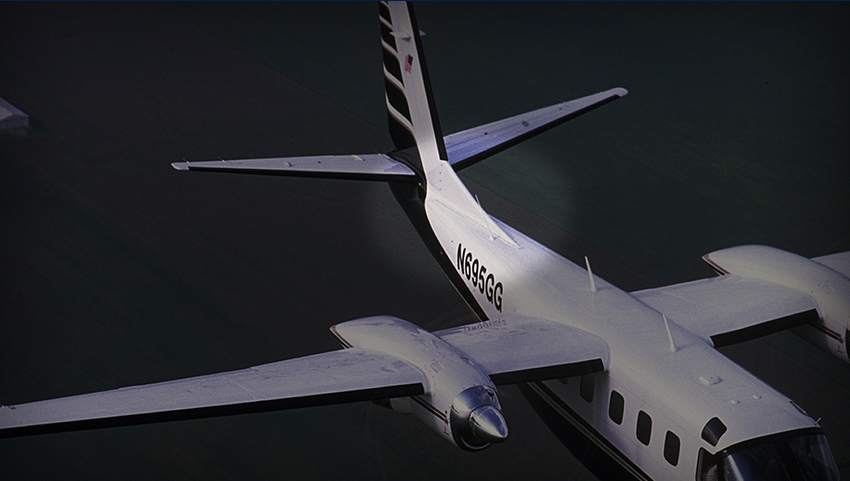 Spend a little and get a big discount. While supplies last, get 20 percent off the list price on Custom Kit CK200, a modern dorsal fin replacement. The kit is quick and easy to install and includes a composite laminate dorsal shell with an integrated moisture dispersion system. In 2011, Twin Commander Aircraft issued a Maintenance Alert on the factory dorsal fin of the 690A, 690B, 690C, and 695A models for excessive corrosion. Moisture can become trapped under the original dorsal fin, causing potential problems in that area. Custom Kit CK200 alleviates the issue, and depending on the condition of your current dorsal fin, there’s aesthetic benefits as well. Contact your preferred Twin Commander Factory Authorized Service Center for pricing and to schedule your installation. 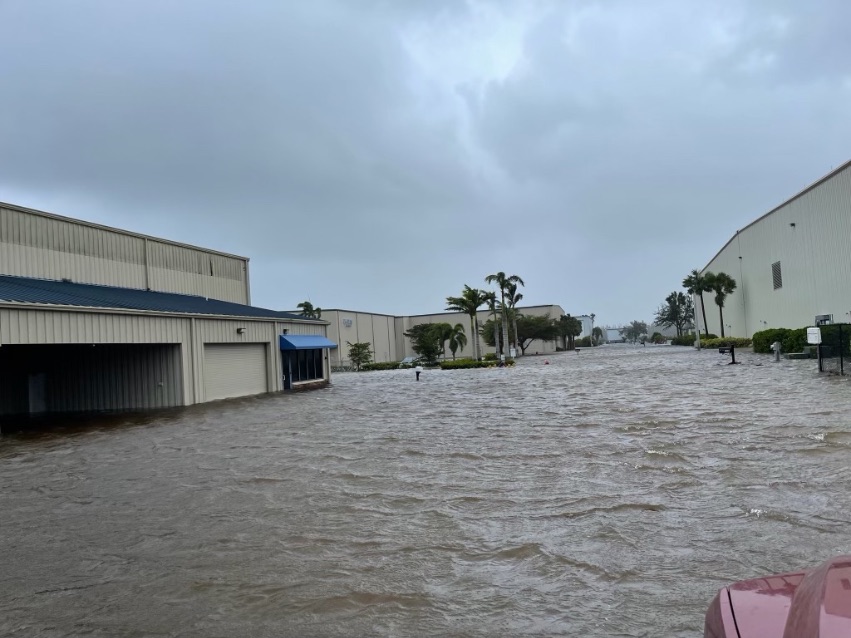 “We’re up and in business,” said Bruce Byerly, owner of Naples Jet Center.Despite the massive damage Hurricane Ian inflicted throughout Southwest Florida, and despite several feet of water covering the Naples airport, the Jet Center was able to reopen soon after the storm passed and the water receded. Byerly said only one of 10 of their hangars stayed dry, and lots of ground equipment was damaged. But great foresight on the team’s part meant that all the airplanes were either flown out or moved, and none sustained damage. The team took one day to clean up the facilities, and were promptly back in business serving customers. 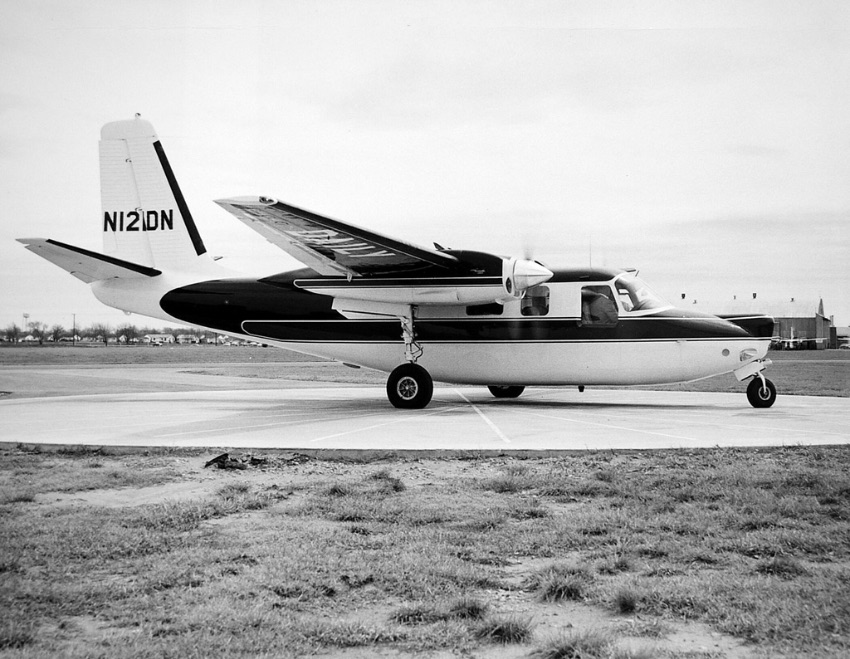 Identifying this classic isn’t easy. It’s one of two visually identical piston models. The three intakes on the engine nacelle should help narrow it down.
Can you name that model?