The MT-Propeller has no life limitation, and is repairable in the event of FOD-related damage. The prop has bonded nickel alloy leading edges for erosion protection. The five-blade prop also provides near vibration-free propeller operation.

TBO is at 3500 or six years, with plans to increase that to 4000 hours or six years. The retail price for a pair of five-bladed, constant-speed propellers with feathering and nickel leading edges is $98,500.00 (including exchange for the existing propellers and spinner assembly). Freight from Germany and Installation are additional.

If you will be at the NBAA Convention and Exhibition, plan to stop by these Twin Commander Service Centers to see what they might offer in the way of service and parts support for your Twin Commander, and in the case of Banyan and National, FBO services when flying to KFXE or KTOL.

Global, located in the Tomball Jet Center at David Wayne Hooks Memorial Airport in northeast Houston, escaped the major flooding or damage that affected much of the Houston area, but the area surrounding the airport was flooded. Global was shut down for five days after Harvey because the water was high “all around the airport,” said Sherrie Ray, who along with her husband Doug own and operate Global. “It’s still slow going, but we are thankful we came through it okay,” she said.

Naples Jet Center at the Naples, Florida, Municipal Airport, took a near direct hit from Hurricane Irma that made landfall in Florida in early September with winds clocked at 143 mph at the airport. NJC had moved all the airplanes in its storage and maintenance hangars, and no staff were on site when the storm hit. The Category 4-strength winds destroyed the mesh doors on two large storage hangars owned by NJC, but no other significant damage was reported.

The company resumed operations several days after the storm. The two hangar doors will be replaced.

MORE OF WHAT YOU’RE LOOKING FOR ON TWIN FACEBOOK PAGE 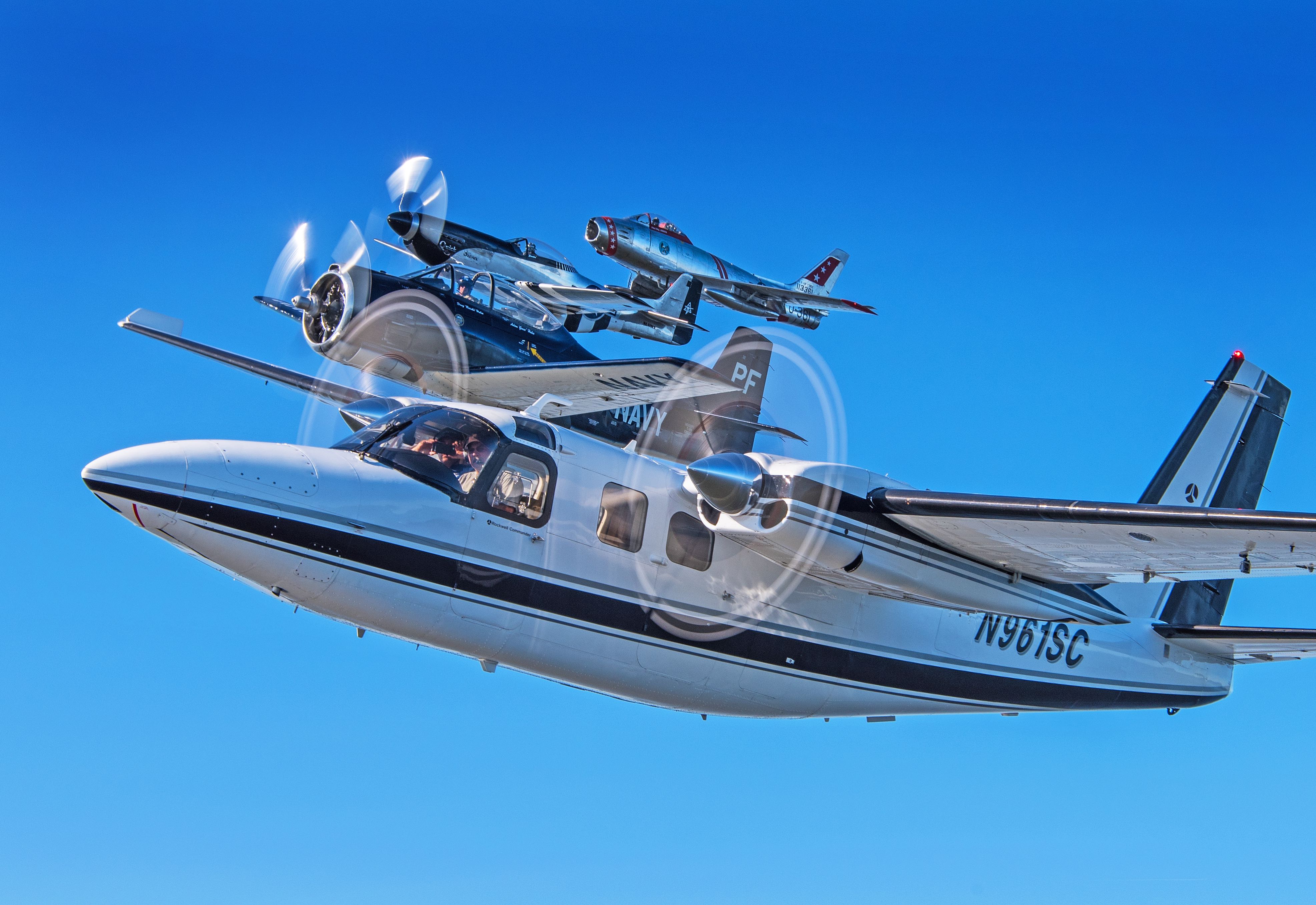 “All the news that fits” is an appropriate slogan for the hefty New York Times, but limited space in the Twin Commander eNews and Flight Levels magazine sometimes forces us to limit the photos or words accompanying a story. Well, to use another famous media slogan (this one from Paul Harvey), “the rest of the story” often can be found on Twin Commander Aircraft’s Facebook page.

For example, in last month’s eLetter we published a dramatic photo of a Shrike Commander in formation with an F-86 Sabre, P-51 Mustang, and T-28 Trojan taken during EAA’s 2017 AirVenture. The occasion was a tribute to the legendary Bob Hoover, who flew all of those aircraft in his post-war career.

We had more great photos of the formation, but no room in the eLetter to publish them, so they have been placed on Twin Commander’s Facebook page.

You can find lots of other interesting information and photos on the Facebook page, which has grown dramatically in popularity since it was launched two years ago—more than 1,000 people have “Liked” the page.

For all the news that fits Twin Commander, see our Facebook page.