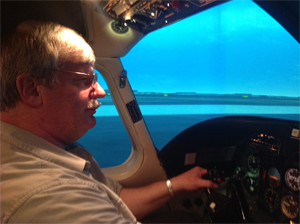 When Will Shinew joined SimCom Training Centers about a year ago, the Orlando-based company was embarking on an ambitious expansion. SimCom had recently acquired PrestoSIM, which conducted simulator-based legacy Citation and King Air 200 training in a facility near DFW International Airport. Then the big move: SimCom bought 14 simulators and training programs from FlightSafety International, including two motion-based Twin Commander simulators and associated training programs. The Commander simulators were relocated to SimCom's new DFW location, and Shinew, who has practical experience flying Commanders, was assigned to the new program.

Today Shinew is the lead instructor for the Commander JetProp training program and simulator, and he's having a ball. I fell in love with Twin Commanders, he said of his experience flying them, and now I've fallen in love with the people. They are enthusiastic about their airplanes. I know once you start flying one, you become pretty loyal.

Shinew is one of seven instructors involved in SimCom's Commander pilot initial and recurrent training at the DFW center. Simulators include a motion-based Dash-10-configured Commander JetProp and motion-based Dash 5-configured 690-series, and a non-motion flight training device (FTD) configured as a 690A with Dash 10T engines. A 180-degree wraparound visual system in the FTD provides realistic motion cues in day, night, and twilight conditions.

The visual motion cues are really outstanding, Shinew says. We have people who swear the simulator is moving.

Commander training is the busiest program at the DFW center, according to Shinew, and has more instructors. With the addition of the former FlightSafety programs and equipment, SIMCOM operates 59 simulators in five training center locations in the United States.

Shinew learned to fly as a teenager, washing airplanes in exchange for flying time. He kept adding to his certificate and ratings count, and eventually landed a job flying auto parts around the country in a Cessna Caravan, King Air 100, and Piper Navajo.

Before turning to professional flying fulltime, Shinew owned his own financial services firm. In the mid-1990s, however, Shinew surrendered to the inevitable. I told my wife that I enjoyed flying, and that's what I want to do.

Along with the early freight-dog experience, Shinew's interesting pilot resume lists a stint flying Casa 212 and de Havilland DHC-8 turboprops in Afghanistan and the U.S. for Blackwater Worldwide. He crewed a Cessna Citation 650 based in Smyrna, Tennessee, and before joining SimCom commanded a Kissimmee, Florida-based 690B Commander, for a businessman-owner.

Shinew and his fellow instructors have worked primarily with Commander owner-pilots, but also military and corporate operators. One bit of advice from Shenew to pilots: Don't rely too heavily on use of the autopilot from initial climb to short final. We try to cure that in the first couple of sim sessions, he says. If the autopilot goes inop, you gotta be able to fly that thing.