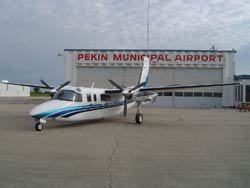 CROSS THE ATLANTIC FOR SERVICE? NO BIG DEAL

willmFor most of us, flying the Atlantic in our own airplane is a dream trip, a once-in-a-lifetime adventure. For Will M.. (he prefers to remain anonymous), who lives in the United Kingdom and flies an 840 Twin Commander, ocean crossings are no big deal. His first was eastbound—from the U.S. to the U.K.--in 2002 when he bought his first Twin Commander, a 690A, in the United States. The second was in 2005, also eastbound, when he bought his second Twin Commander, an 840 JetProp, also in the U.S. Now he's done it a third time—a round-trip—because he wanted to have the 840 painted and serviced at Byerly Aviation in Peoria, Illinois.

Why fly more than 7,000 nmi back and forth across the Atlantic Ocean just to get some work done on your airplane?

The “work” included repainting the aircraft, taking care of some outstanding service bulletins, replacing the deice boots, and completing a 150-hour inspection. That project list couldn't have been completed in the U.K. at just one shop, according to Will, which meant he would have had to use several facilities resulting in extended downtime.

The flight from his home field, North Weald Airport just north of London, to Peoria was, in fact, an incentive for Will to use a U.S.-based service center. “I quite enjoy flying,” he said from his home in England. “Flying a turboprop makes the Atlantic crossing easy. I know it sounds like a long flight, but I made it over there in a day and a half. I told Byerly we would be there by 8, and we landed at 7:30.”

The westbound flight to deliver the aircraft to Byerly was conducted in early March in strong headwinds, and took about 16 hours. The longest leg, about 1150 nmi from Frobisher Bay to Sault Ste. Marie in Ontario, Canada, took 4 hours 52 minutes.

Will uses his 840 in his residential construction business and to travel with family to skiing and beach holidays throughout Europe. “I can be somewhere at 8 a.m. and be back home in the afternoon,” he says. “I use it for 30-minute flights as well, because traffic here is horrendous. That 30-minute flight would take four hours to drive.”

His first airplane was a Socata TB-20 Trinidad piston single. Next came a turbocharged, pressurized Baron 58P, which he flew for six years. Turbine performance and reliability and Commander ruggedness led him to the 690A.

“Commanders are made to airline standards,” he says. “You can get 150 hours between checks. With the Baron it was 50 hours before I'd get a snag. Turbines can be expensive if they go wrong, but they rarely go wrong.”

He moved up from the Dash 10T-powered 690A to the 840 because “it's a newer aircraft, with newer systems and a wet wing. It's been very economical to own and run.” He logs about 175 hours annually in the 840, and says the airplane has a 100-percent dispatch rate.

Will returned to Byerly in late May to retrieve the finished 840. “I must say how very pleased I am with the aircraft's painting and maintenance,” he told Byerly. “The painting and detail on the finishing is the best I have seen. Please pass on a big thank you to Gerry and the guys and Kerry in maintenance. Your service was very professional and efficient.”

The trip back to England took just over 13 hours and three stops, including the final landing at North Weald.

Reached at his home in England, Will says that taking the airplane to Byerly was the right choice. “Honestly, it's the best thing I've done,” he declares. “Byerly does what they say.”