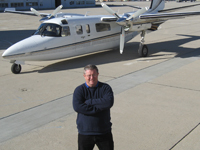 In the nearly eight years that the San Bernardino County, California, Sheriff’s Department has been operating its Grand Renaissance Twin Commander, Wayne Pliss’s enthusiasm for the airplane has not waned. “I still love it,” says Pliss, chief pilot for the fixed-wing division of the Sheriff Department’s aviation unit.

“It’s my favorite airplane. We’ve put 1100 hours on it, and I’ve probably flown 90 percent of that.” The Sheriff’s Department uses the Aero Air-built Grand Renaissance to move executives around the county—the largest in the United States—as well as for prisoner transport and various other law enforcement missions that call for fast, discrete movement of people and evidence.

The Commander also serves as an airborne command post for fighting wildfires in the county. Observers in the Commander, which is fitted with a special portable “air attack” radio package during fire missions, direct fire bombers and manage the airspace in the vicinity of the blaze.

Pliss also flies the department’s King Air, a military surplus C-12 that has been converted to civilian 200 configuration. “If I have a choice, I’ll fly the Commander any day,” says Pliss. Compared to the King Air, the Commander has more speed, better full-fuel payload, lower fuel consumption, and lower engine overhaul costs. “Everything about it makes more sense,” Pliss says.