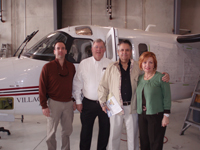 J. Pedro Villagran has spent his entire professional life—nearly 40 years—building his law firm in Hermosillo, Mexico, and today he has much to show for that effort. He has expanded his practice, which originally specialized in civil law, to mining and real estate law, mining and real estate investments, and home building. He has opened satellite offices in Mexico City, Los Cabos, and Puerto Penasco. And, most significantly, he has made his business a family business, with each of his four sons involved in different activities within the Villigran y Villigran Abogados firm.

About three years ago Villagran made another strategic move to expand the firm’s reach when he decided to buy an airplane.

“Our business has been growing,” explains son Ariel, an accountant who works in the real estate side of the business, “and our travel needs have increased. Real estate in Baja has been really good—real estate is one of our main businesses—and we’ve opened an office there.”

The firm also has real estate interests and building projects on the northern coast of the Golfo de California. They travel frequently to the United States, especially the Phoenix area. And they continue to pursue the legal side of the business, which has its own travel urgency.

“Usually, litigation asks for prompt responses,” Ariel explains. “We need to get there on time, and respond as quickly as possible. With the business flourishing, my dad, who has all of his sons working with him, said he wanted an airplane.”

When the decision was made to acquire a company aircraft, J. Pedro Villagran and two of his sons remembered a flight they had taken in a Twin Commander some 15 years ago. “They just loved the airplane,” Ariel says. Although they looked at several aircraft, they settled on a 690B Twin Commander. “We thought the Twin Commander to be the best because it has the speed to get there fast.”

Proximity to authorized service centers also was a factor in the family’s decision to buy a Twin Commander. They make frequent trips to the Phoenix area, and Executive Aircraft Management (EAM) is in nearby Scottsdale. The Villagrans have been using EAM and are happy with the service they receive. With 22 service centers located around the world, they are always within reach of Twin Commander experts.

The airplane is used exclusively by the family, and flies from 20 to 40 hours a month. They love the Commander’s speed, so much so that when it came time to overhaul the engines they opted for the Dash 10T upgrade. EAM is performing the conversion as well as completing component inspections and upgrading the panel.

Ariel expects that the Dash 10Ts will cut flying time to all of their destinations. For example, it has been a 1hour 40 minute flight to Cabos. “With the conversion we hope it will be one hour twenty minutes,” he says.

No one in the family is a pilot—they have a professional two-pilot crew for the Twin Commander—but Ariel said he and a brother hope to someday learn to fly. “There’s just too much work right now,” he says. “So we need to get more involved in work than flying. But I would love to learn. I just need to find the time.”