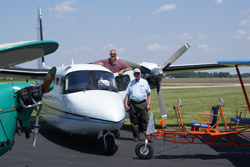 You’d think Tom Frasca would be scratching his head with indecision every time he goes to the airport. After all, he has his choice of 32 or 33—he’s not sure of the exact count—different aircraft to fly. They range from a tiny, single-seat Aeronca C3 and open-air Breezy, to a high-flying Twin Commander 690B and a Westwind jet. The decision of which one to fly gets a lot easier if he’s going on a trip of any significant length, and especially if there will be weather anywhere along the way.

“The two best airplanes, the ones we love dearly for this type of work, are the Turbo Commander and the Westwind,” he says. “Both are very easy for passengers to get in and out of, they have tremendous range, and nice cabins.”

frasca Tom is vice president of Frasca Air Services, a division of the Urbana, Illinois, company founded and still run by his father, Rudy, that is celebrating a half-century of manufacturing flight training equipment for airlines, flight schools, and military organizations worldwide. The Frascas are a flying family, and their extensive collection of aircraft reflects their wide-ranging passion for aviation. That Aeronca C3—it’s the one Rudy Frasca flew in high school 60 years ago. They also still own the Luscombe that was the company’s first corporate aircraft, and the Cessna 170 that all of Frasca’s sons learned to fly in.

They also love warbirds, and own and fly 10 including a Fairchild PT-23 that used to belong to EAA founder Paul Poberezny, and a Grumman Wildcat that has been in the family since 1968. The warbirds—in fact, their entire collection—is based at Frasca Field (C16) in Urbana. Tom manages the airport, and is the designated business pilot for Frasca International.

As such, he has been in the left seat for nearly every one of the approximately 3,000 hours that have been logged in the Twin Commander since the Frascas bought it in 1990. “Yea, we’re kinda new in the airplane,” he chuckles. “I think we’re going on 18 years now. I’ve got engine start figured out. Now if I can just learn to taxi it!” Then he comes clean. “Actually, I know where all the switches are. It fits me like an old shoe.”

The Commander offers Frasca good flexibility for short trips and long to visit universities with aviation programs, aircraft manufacturers, professional flight training providers, and aircraft operators with in-house training needs. “It does everything we need it to do, says Tom. “We use it for anything from a short trip to Chicago, to Key West in the spring. We’ve been to the west coast several times, including Seattle. We’ve done Vegas a million times, Daytona, Orlando, and up and down the east coast—wherever business calls. Every airport is a potential customer for us.”

The Commander is the company’s workhorse. It has been updated with a capable new avionics package and the main gear doors have been removed, but otherwise it is in standard trim with standard TPE331-5 power. It’s also fast—Tom routinely sees true airspeeds of about 270 knots at his typical cruising altitudes from Flight Levels 210 to 240.

The Frascas bought the Commander through Byerly Aviation, and continues to use Byerly for 150-hour inspections and maintenance. All service bulletins have been performed except for SB 237 calling for upper wing skin and strap inspection. That will be done at the end of the year, Tom says.

He has come to expect good service from Byerly and Twin Commander Aircraft—“they take care of us,” he says—and trouble-free performance from the Commander. “It starts and runs every time. It works for me. I plan to have it another 18 years.”