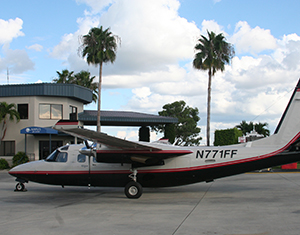 THE FAULKNERS, IN A HURRY

Twin Commanders are rightfully known as pilots’ airplanes. They check all the boxes that are important to pilots—outstanding performance, fun-to-fly handling, country strip to Chicago O’Hare flexibility, and a commanding presence on the ramp. But how about Commander owners who are not pilots? What do they see in their airplane compared with any number of other turboprops or jets they may have considered?

Greg and Kathy Faulkner are such owners. Greg has always loved airplanes, and even took flight lessons, soloing in a Cessna 172. But between flying, family, and careers—they have four school-age children, Greg is an institutional bond salesman and trader, Kathy is a Harvard MBA-educated CPA, and they own real estate and other investments—something had to give. “When work slows down I probably will get back into flying,” Greg says, “but I knew it wasn’t smart to try and do everything.”

One priority that they cannot put aside is making the best use of their time. “I’ve always been interested in getting places fast,” Greg says. “We’re always in a hurry.” That’s why he and Kathy look at airplanes as “massive” time savers. Family time is very important to them, and when it comes to his work, Greg says that “As a commissioned salesman I only get paid when I’m at my desk,” so it’s important that he make the most efficient use of his travel time. An airplane enables him to see clients in other cities during the day, and be back home that night so he can be at his trading desk first thing in the morning.

The Faulkners began chartering and leasing piston twins and jets in 1996 for both business and personal trips. The personal flights included day trips around Florida—they live in Naples in Southwest Florida—to attend daughter Brooke’s soccer matches. But they grew increasingly uncomfortable with the thought of putting their family in ancient piston-powered airplanes. They also were dissatisfied with the hassle and expense of chartering jets, most of which had to be repositioned to Naples from the Ft. Lauderdale-Miami area, and of seeing a different pilot in the cockpit on each flight. So, they began looking around for an airplane to call their own.

One hard-and-fast requirement was that it have turbine power. And, given the Faulkners’ are-we-there-yet nature, it had to be fast. Also, since this would be their first airplane, they wanted to approach it conservatively. “We’re trying to learn about aviation, get our feet wet,” Greg says. That meant operating cost was a primary consideration, which pretty much eliminated a jet from the short list.

A pilot friend told Greg that he should look at Twin Commanders. “He said they can do a lot, for a lot less than a jet.” The Faulkners also looked at King Airs, but concluded they did not compare favorably with Commanders. “The King Air 200 is more expensive and doesn’t have the same performance,” says Greg, “and the 350 is even more expensive, and you’re not getting there any faster.”

The search for the right airplane led them just down the street to Naples Jet Center and Bruce Byerly, who found a low-time, one-owner Commander 690D (Model 900) on the market. The airplane had all the attributes that appealed to the Faulkners. The JetProp 900, built by Gulfstream Aerospace, which had inherited Commander production when it acquired Rockwell International in 1981, was the first Commander to have 6.7 psi pressurization for a lower cabin altitude when cruising in the flight levels. It also has an extended passenger cabin with a wide, slightly curved belted potty seat in a rear compartment that can be curtained off. “Most comfortable seat in the house,” Greg says. And with seating for seven plus pilot, the cabin easily accommodates the entire Faulkner family plus a friend.

The previous owner had upgraded the engines to Dash 10T configuration, so the airplane is capable of cruising at 300 knots true airspeed at altitude (25,000 to 27,000 feet MSL) in the winter when ambient temperatures are colder. Although Greg would like to be going Mach 2, especially on longer flights, he appreciates the fuel efficiency of the Honeywell engines. On a typical trip the two engines combined use about 85 gallons the first hour, and about 75 gallons every hour after that—less when cruising above FL250.

About 180 lbs of wiring came out and was replaced witha Garmin G600 with electronic Primary Flight and Multifunction displays, and a Garmin GTN750/650 package with integrated audio panel.

The Faulkners also appreciate the airplane’s stamina—about 5 hours 30 minutes endurance with 45-minute reserves—thanks to the 900’s long wing and long-range, 474-gallon fuel capacity. They have taken advantage of it, too, on non-stop trips from Naples to the British Virgin Islands, Boston, Chicago, and Kansas City.

It’s not just about going long and fast, however. The Commander is efficient on short hops as well. Brooke still plays in the traveling soccer league, as does their son, Gregory. What would be five-hours-plus drive times to soccer venues within Florida turn into one-hour round-trip flights in the Commander. That means Greg has time on weekend mornings to get some tennis in—he was a nationally ranked college player and captain of his team—and still go to the soccer games without it costing a small fortune. They are back home by mid-afternoon. Having the Commander available means more time spent with all of the family.

Along with the short, in-state missions that can be done quickly, efficiently, at reasonable cost, and with a lot more peace of mind than in a piston-powered airplane, it’s also been good for those special family vacations to more distant destinations. They recently planned a weekend family trip to Chicago to see the Cubs play at Wrigley Field, explore some museums, and do some shopping. The Cubs game started at 1:20 p.m. on a Friday, so as soon as Brooke finished an Advanced Placement math test at school that morning, the family picked her up and drove to Naples Municipal Airport. The Commander was on the ramp ready to go, and within minutes was taking off with all aboard.

About 3 ½ hours later the family climbed out of the Commander at Chicago Midway Airport and into a car that took them directly to Wrigley for the start of the game. The driver then dropped off their luggage at a downtown hotel.

Not long after purchasing the 900 Greg and Kathy worked with Naples Jet Center to design a new panel. The airplane is flown single pilot, and the Faulkners wanted that pilot to have all of the tools. Out came the electromechanical ADI and HSI, the FMS, a Foster loran, and a traffic display, and in their places went a Garmin G600 with electronic Primary Flight and Multifunction displays, and a Garmin GTN750/650 package with integrated audio panel. Greg says that one of the main reasons they bought the Commander was to fly the family, so they were “willing to spend money on safety.”

And comfort, too. The interior is all new—carpeting, headliner, side panels, and chocolate-colored leather seats with baseball-style stitching. The passenger cabin is equipped with three AC outlets, and on a typical family trip there are laptops everywhere for doing homework, watching movies, and listening to music. The Faulkners opted not to install video monitors, a DVD player, and XM music because everyone in the family likes to watch and listen to something different that they have downloaded from iTunes or other sites.