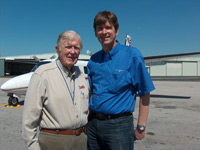 Stan Perkins pays what may be the highest possible compliment to his father, Bob. “We’re best friends,” Stan says. One of their common interests is flying—both are pilots, and both have been Twin Commander owners. They often fly together, including to the last three Twin Commander Universities, where they could be seen listening attentively at each seminar presentation.

During the 1970’s, Bob Perkins owned three different Twin Commanders—two 680Es, followed by a 680W Turbo II, the second turboprop-powered model in the Commander historical lineup. When Stan started his flight training, (with his dad as his instructor) it was in his dad’s 680E. In fact, he passed his private pilot check ride in it on his 17th birthday. “All my early experience was in my dad’s 680E,” he explains. “I was so comfortable in that airplane that it made sense.”

Soon thereafter he bought a Cessna 172 to train in for single-engine and instrument ratings and a Commercial certificate. He planned to sell it after his training was finished, but instead, he hung onto it for more than eleven years while attending undergraduate school at the University of California-San Diego, followed by medical school at Harvard, and finally his residency at Stanford University. “I used to put all my laundry in the back seat when I flew home for visits,” he recalls.

TargetNot surprisingly, years later when Stan decided to buy a twin he went for a Twin Commander, a 681 Hawk, the model that bridged the 680W and the 690.

Bob Perkins was a World War II Navy pilot and primary flight instructor, and flew in the reserves after the war. “He got to fly nearly all the service aircraft,” Stan says, including the now rare OS2U Kingfisher, an unusual catapult-launched observation aircraft with a single, large, belly-mounted pontoon and two outrigger stabilizing floats.

Following his military service Bob worked in San Diego for Ryan Aircraft Aeronautical Company as a mechanical engineer. He and a friend later founded their own fiberglass and thermoplastic fabrication company, based in Torrance, California. He owned a Cessna 310 at that time, but was looking to upgrade. “Someone recommended the Commander to him because it was more capable and spacious as compared to the 310 and other light twins,” Stan says.

TargetBob bought a 680E to use in his business, and later sold it for another, better-equipped 680E. (His first 680E now belongs to Jim Metzger, founder and director of the Twin Commander Flight Group.) When the business added a division in Texas and Bob’s travel needs expanded, he sold the second 680E and bought the 680W.

Bob Perkins sold his 680W in 1979. Stan sold his 172 in 1985 and spent the next two decades concentrating on building his anesthesia practice and flying friends’ airplanes. In time he started thinking about buying an airplane the two of them could fly in and enjoy. “Dad and I always used to talk about having a family airplane,” he says.

The brand choice was easy. “Dad said the best overall airplane he ever owned was a Turbo Commander. I decided that as long as he is still living nearby and able to fly and participate, I would get one.”

His budget at the time dictated that it would have to be an older model, and the 681 seemed perfect. “Dad had a 680W, and the 681 is the ultimate expression of the 680W,” Stan explains.

Despite not having flown Twin Commanders for several years, Stan quickly transitioned into the 681. “I always admired the Commander design,” he says. “I had so much multiengine experience that I was used to that level of performance, and I understood the systems. I wasn’t uncomfortable at all moving into the Commander. Flying the 681, even after 24 years of not flying a Commander, was like putting on an old shoe. Everything was right where I thought it would be, and it flew just as I expected.”

To date Stan has logged almost 4,000 hours, of which about 2,600 are in multiengine airplanes including 2,200 in Twin Commanders. At age 91 Bob still has a current FAA medical certificate, and, with a big smile on his face, still takes the controls of the 681 on occasion.

“I like to take Dad on trips with me,” says Stan. When he bought the 681 in Dayton, Ohio, he and Bob flew it back to California together. “We’re always doing something with it,” Bob says. “There’s always some great plan,” Stan adds.