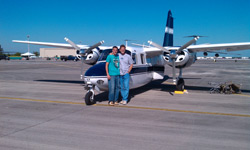 SAVING A PIECE OF AMERICAN—AND COMMANDER--HISTORY

Pop quiz: Name the lovely shade of blue that distinguishes the Air Force's Presidential fleet. Scott Main knows, at least as it applies to one of the airplanes assigned to the Presidential fleet in the mid-1950s. The improbable answer: Baltic Blue, as in the very same Baltic Blue that Oldsmobile applied to the steel bodies that rolled out of the factory in 1954. Main knows this because of research that he and some sleuths at Twin Commander Aircraft LLC did in preparation for painting the very rare L-26 Commander he owns, has restored, and flies around to air shows.

Main's 1955-vintage Commander is one of 15 the U.S. Air Force bought from Aero Commander for use in the Presidential fleet. It's essentially a Commander 560A with special markings and paint. The story goes that, after he suffered a stroke and was recuperating at his farm in Gettysburg, Pennsylvania, President Dwight D. Eisenhower instructed his staff to get him an airplane that could take off in Washington, fly the 60 or so miles to Gettysburg, and land at his grass strip.

The then-new Aero Commander was the choice, but Air Force brass objected to the President riding in a piston-powered twin. However, when Aero Commander demonstrated the capability and safety of its new twin by removing one of the propellers before taking off from Oklahoma City and flying to Washington D.C., they relented.

The result was the purchase of 15 Commanders to transport the President and other high-level government officials on short trips. The baker's dozen 560As and two 680s that the Air Force bought were the first and only piston-powered twins ever employed in the Presidential fleet. They received the military designation L-26, which even today is little-known among warbird afficianados.

Main has obtained the military records of his airplane, which has a pair of serial numbers—247 from Aero Commander, and 55-4638 from the Air Force—and according to its military records it remained in government service until 1973. Its history after being sold as surplus is unclear—it may have flown weather research missions for the University of North Dakota—but eventually it was bought at auction by two Oklahoma men who intended to restore it, Main said. Instead, the airplane languished.

More than a dozen years ago a friend of Main's was pressuring him to partner on an airplane. Main, who has been flying for 40 years, has done it all in terms of flying—he was an instructor, he repossessed airplanes, he flew as a charter and corporate pilot, he is a lifelong warbird fan and former warbird judge at Oshkosh and Sun 'n Fun, and for the last 30 years he has flown for a major U.S. airline. He grew up working on cars and airplanes—he is an A&P—and had restored a North American T-6 to Oshkosh award-winning condition. But he had tired of the expense and hassle of being a warbird owner and sold the T-6, vowing never to buy another airplane. That did not deter his friend, who said he found an Aero Commander 560A in Oklahoma. "I said 'Geared engines and pressure carburetors—forget it!' " Main laughs.

Then his friend said it may have been one of the airplanes Eisenhower used. "Tell me more," Main said to his friend. The hook was set. Main bought the L-26.

"It was in rough shape," he says, but he got it airworthy and flew it for several years before parking it in a hangar at Ft. Lauderdale Executive Airport. The annual inspection and insurance lapsed, and the airplane sat. In 2005 Hurricane Wilma blew through, damaging Main's hangar and the airplane inside.

The storm pushed the hangar door off its rollers, and it fell on the nose of the airplane. The hangar sidewalls collapsed onto the left wing. The wind pushed the airplane into support beams, damaging the flaps. And there was water damage. Although not severe, the damage had to be repaired. Main worked at it, then decided it was time do it right and restore s/n 247 to its 55-4638 Air Force glory.

Getting the paint scheme and markings correct wasn't a problem, but getting the color right was. Main enlisted the help of Twin Commander Aircraft LLC to research obscure records, including military and Aero Commander files. They determined that the Air Force specified the airplanes be painted "Baltic Blue."

Great, but what exactly was Baltic Blue? In the early days Aero Commander painted airplanes in colors borrowed from Ford Thunderbirds and Lincolns. But in 1955, the year Main's L-26 was completed, Ford Motor Company did not have a Baltic Blue in its roster of colors.

Twin Commander's Pam Brown eventually solved the mystery when she found a reference to the color in the Air Force order for the aircraft. It helped identify the color as one used by Oldsmobile on its 1954 cars. "It was a DuPont Dulux color," Main says.

Mystery solved, Main took the airplane to Robert Loomis at Executive Jet Refinishing in Stuart, Florida. "He got excited about the project, and went way beyond the call of duty," Main says. Six weeks later the airplane emerged with every bit of the exterior spit, polish, and military bearing it had 55 years ago when Aero Commander handed the airplane over at Bolling Air Force Base.

After it was painted, Main went to work on the inside, gutting the interior. He replaced the original 1970s-vintage interior with leather-covered seats, and installed more contemporary avionics equipment in the panel. "The panel is not original—I updated it slightly," he says, "but I tried to keep as much of the 1955 look as possible." One component he did not have to put much time into was the engines. They had been overhauled years earlier but are still low time and run well. "The engines were the high point of the project," he says. "To start one I just prime, hit the starter, and in two blades it's running like a sewing machine. The only issue is "sealing endless leaks,'" he says.

The project was completed in the fall of 2010. Its first public appearance was at the Wings Over Homestead air show at the Homestead Air Reserve Base south of Miami. "People loved it, but they scratched their heads because they had never heard of an L-26," says Main. Based on his research, Main does not believe his airplane ever flew the President. That duty was reserved for one of the two Aero Commander 680s the Air Force operated. However, it did transport high-level officials, and as far as he knows it is the only one of the original 15 purchased that is restored, airworthy, and actively flying.

(The National Museum of the U.S. Air Force at Wright-Patterson AFB in Dayton, Ohio, has in its collection the Aero Commander 680 assigned to President Eisenhower. It carries the Air Force designation U-4B.

Main is happy with his decision to restore and fly the Commander. He calls it "the perfect warbird. There's room for six friends, folding chairs, and coolers," he says. "And, at the air shows it's a built-in shade tree. Plus, it's a pleasure to fly, and everybody loves it. I get lots of positive comments."

Main stopped going to air shows when he sold the T-6. Now, thanks to the L-26, he's back into it "and loving it. My kids fly with me! The project was expensive and very time-consuming, but well worth the effort to save an important chapter of American aviation history."