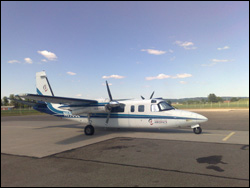 One feature in particular makes the Twin Commander a superb platform for aerial observation missions—visibility. A high wing and engines and propellers that are positioned well aft of the cockpit and, on all but 695 models, sweeping panoramic windows on each side of the passenger cabin afford unparalleled views below and around the airplane. Visibility is the Twin Commander’s trump card when it comes to observation duty. But if the job calls for the use of belly-mounted cameras and sensors, all airplanes would seem to be created equal. If that’s the case, why does Rob Barnett chose to fly Twin Commanders for data-gathering missions?

Barnett1 “The Commander makes a great airplane for survey work, no doubt about it,” says Barnett, co-owner of Centerline Aerospace. Centerline operates a 690A and a 500 piston twin, and is buying a straight 690. All are dedicated exclusively to collecting data using a variety of electronic sensors and conventional cameras.

“We’ve looked at others—the Piper Chieftain and Cheyenne, and Beech King Air, for example—but the Commander’s power-to-weight ratio, payload, speed, stability, and efficiency are the best. It’s a fantastic airplane, really. In heavy turbulence the ride is much better than in a low-wing airplane. It doesn’t yaw as much, or oscillate. It’s great for hauling equipment, too—you don’t have to walk around the wing all the time to load and unload, you just go under it. The wing makes for a good umbrella in the rain, too. When you live in an airplane you’re kinda particular which one it is.”

Centerline is contracted by various companies, governments, and agencies around the world, including the National Oceanic and Atmospheric Administration (NOAA) and the U.S. Army Corps of Engineers, for a wide variety of survey missions. They range from mapping the sea floor and adjacent beach grade, and measuring the moisture content of soil, to photographing all of downtown London to identify potential cell phone tower sites.

The specific equipment used for a mission depends on the data being gathered. For example, to map the sea floor and adjacent beach, the 690A carried a blue-green laser that penetrates the surface of the sea, and also a more conventional invisible infrared laser to scan the beach area.

barnett2 The mapping was done at an altitude of 1200 to 1400 feet above the surface, cruising at 155 knots groundspeed. Those low, often-turbulent altitudes are where the Twin Commander really shows its ride and visibility advantages, according to Barnett. “When you are down low and maneuvering a lot, you really need a good view,” he says.

Barnett, who is both a pilot and mechanic, typically operates with an observer, although on occasion a third and even fourth person will be aboard for training or observation. The observer establishes a grid pattern for the pilot to follow. The 690A is flown with the autopilot engaged, although it is not slaved to the GPS grid pattern. As the airplane rolls into a turn, the expensive gyro-stabilized sensors also roll to maintain a level perspective.

The sensors are controlled by a highly sophisticated inertial reference system that is capable of maintaining vertical accuracy of 2 cm, according to Barnett.

The 500 does not have an autopilot, so missions are hand-flown. On data-gathering runs turns are made with minimum roll by skidding. “Once you get used to it you don’t have to skid much because you’re already using a wind-correction angle,” Barnett explains.

The 500 is equipped with a passive microwave radiometer that can “see” 30 feet below the surface to map soil moisture. The device is used to, among other things, look for leaks in pipelines and levies.

The airplane also has a Midas Pictometer system that uses five cameras—one pointing down and the other four pointing out into quadrants. The effect is to reduce the “leaning” look to outlying buildings that results from the use of conventional cameras that only look straight down.

Centerline’s Commanders are flying in excess of 400 hours a year, and that is expected to go to 700 hours or more when the 690 is brought on line. One of the airplanes will be assigned primarily to NOAA and the Corps of Engineers, according to Barnett. Other jobs will take them to Australia, Southeast Asia, France, Spain, and Portugal.

It’s a nomadic existence, but Barnett, who lives in England, flies for two weeks and then has four weeks of ground-based duties and time off. A second pilot flies for four weeks, followed by two weeks off.

Given Centerline’s far-ranging destinations and intensive schedule, maintenance is a key issue. Barnett uses Legacy Aviation west of Oklahoma City for parts and for inspections and maintenance on the 690A. “The mechanics do a good job, and they give us fair deal on parts,” he says. “We can call them day or night for parts and know they’ll be shipped out. There’s a lot of trust there. They get a gold star.”