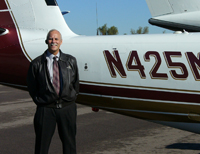 Rick Butler, a successful real estate developer based in Lakewood, Colorado, is partial to the color green, as in doing his part to keep the world a healthy green through environmentally responsible development. Butler also thinks the “green” label wears well on his 690C Twin Commander.

Signature Centre “uses 36 percent less energy” than a conventional office building, according to Butler, yet was built without significant additional cost. “It was done within the economic constraints of the marketplace,” he says, and was fully leased five months before it was completed.

Butler’s commitment to energy conservation—“I’m very serious about mitigating consumption of petroleum products,” he says—is one of the reasons he’s decided to abandon his plan to move into a jet and, instead, continue flying his more fuel-efficient Model 840 Twin Commander. The other reason is performance: the airplane he was most interested in, an Eclipse 500, simply could not complete missions that Butler considers routine in his Commander.

He is based at Centennial Airport south of Denver, elevation 5885 feet MSL, and ranges throughout the western U.S. in the Commander. Butler had purchased an Eclipse delivery position, but when he was finally able to examine the airplane’s performance numbers in detail, he concluded it could not depart from Centennial on a hot day with enough fuel to fly nonstop to California, even with just two aboard. “I started calculating my missions, and it would just not do it,” he says.

Now he says he is “not looking at anything else.” Most jets and other turboprops burn more fuel and use more runway, or have suspect safety records, he points out. Piston twins don’t have the performance, redundant systems, or engine reliability that Butler desires to safely handle Rocky Mountain terrain and weather.

Instead, he plans to work with Executive Aircraft Maintenance in Scottsdale to repaint his Commander, which he has owned for 11 years, refurbish the interior, add some new avionics and, in the future, upgrade the engines to TPE331-10T configuration.

The Commander is “pretty much the only thing that does the mission,” Butler says. “I can fly in and out of a 5,000-foot-long strip at 4310 feet MSL on a 110-degree day, loaded to gross weight, without any trouble. Not many airplanes—jets, especially—can do that.’

The 840 is Butler’s fifth airplane, and other than the Piper Aztec he once owned, the only one that truly meets his present mission requirements. “I love the Commander,” he says.