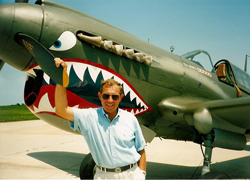 NONE CAN DO WHAT IT DOES

When Richard Hansen bought a 690C Model 840 Twin Commander for his company, Furnas Electric, in 1988 he had no idea that, 21 years later, he would still be operating the 840, only now as the personal owner.

Hansen originally bought the 840 from Byerly Aviation in Peoria, Illinois, which had taken delivery of it new from the factory and had flown it less than 300 hours as a demonstrator. “I put it to work in the company,” Hansen says. Furnas was a Batavia, Illinois-based manufacturer of electric motor controls that Hansen's grandfather founded in 1940. “We ran engineers and sales people around, taking care of customer issues, calling on customers, and overseeing five other plants.”

The company also operated a Citation II and later a Citation V and employed professional pilots, but Hansen frequently flew the 840 himself with one of the company pilots. When Hansen retired he kept the Twin Commander, and about 10 years ago he upgraded the 840 with TPE-331-10T engines. He's also had it repainted and the interior refurbished at Byerly.

As do all airplane owners, he's looked around at other makes and models, both turboprops and jets, to see how they might make his flying more efficient, but his analysis always arrives at the same conclusion: the Twin Commander does the job quite well, thank you.

“We regularly fly to one difficult airport—Telluride, Colorado,” Hansen says. (The elevation at Telluride is 9,078 feet MSL with higher mountain peaks in all quadrants.) “The 840 is the only airplane I know of that can leave Telluride late in the day when it's hot and the density altitude is high with four passengers and enough fuel to get to Chicago (about 950 nmi) and still climb out at 400 fpm on one engine.”

Hansen says he confirmed the 840's performance while at a recurrent training session at FlightSafety International. “I had them program Aspen Airport into the simulator (elevation 7,820 feet MSL), and asked them to crank up the ambient temperature to 30 degrees Celsius. That made the density altitude about 11,500 feet. We took off at gross weight, and the instructor cut an engine. The first time I climbed out at 500 feet per minute, and 450 feet per minute the second time. On one takeoff I forgot to raise the gear and I was still going uphill at 250 feet per minute. That says everything about the airplane to me.”

But wait, there’s more. “Then, of course, you also get 300 knots in cruise. The Commander is one helluva performer,” Hansen says.

NONE CAN DO WHAT IT DOES

“I looked at lots and lots of airplanes when I was thinking of upgrading,” he continues. “None can do what the Commander can. A jet is faster, but from here (Aurora, Illinois, where he bases the airplane) to Telluride costs more than twice as much in the jet. And we'd have to leave Telluride before the temperature gets up above 55 degrees Fahrenheit.”

A pilot since 1956, Hansen has a Commercial certificate with multiengine, instrument, and seaplane ratings. His 7,000 hours hasn't all been for transportation. He was an active warbird pilot and owner who restored a flew a Curtiss-Wright P-40E Kittyhawk, North American P-51 Mustang, one of two Grumman F4F Wildcats recovered from Lake Michigan, and other vintage aircraft including two Beech Staggerwings, one of which was his first business aircraft. “I flew it many hours on instruments,” he says. “Steam gauges.”

In 1997 he entered the first FIA International Long Range Race with two friends, in the 840. They led until the last leg, which ended in Turkey. Because of handicapping based on flight manuals of the aircraft involved, they lost by three minutes to a team sponsored by the Turkish Aero Club, which hosted the race. A second Atlantic crossing was made several years later with his family. “With the excellent range and turboprop security, everyone felt quite comfortable,” Hansen says.

Hansen also has made a North Atlantic crossing in a Beech 18 that he owned.

These days he uses the 840 to travel to Telluride, Scottsdale, and a home in northern Wisconsin. He always takes another crewmember, a professional pilot on loan from Byerly, a practice he has followed since turning 60. “The passengers are a lot more comfortable when they see two of us up front,” he says.

Although his flying has tapered off, he has no plans to sell the 840. “I’m convinced this is an airplane I will keep forever. There isn’t anything out there for the same money that will do the same thing. A King Air 200 can carry more passengers, but I don’t need that. And it has higher fuel consumption. The Citation V would save me an hour and five minutes from Scottsdale to Aurora, but as a retired person I’m not in that much of a hurry.

“Besides,” he adds, “my wife loves the picture windows and that big baggage compartment.”