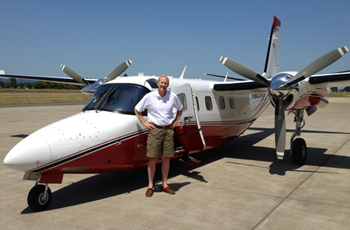 Here's what an online site has to say about one Pete Nickerson:

Pete...is a co-founder and director of Growth-Link Overseas Company, a Hong Kong based firm founded in 1988. The company's main activity is investment in and operation of a series of footwear factories located in China, Indonesia, Vietnam, and most recently India. These factories are engaged in the supply of name-brand footwear and athletic equipment.

He sits on the boards of publicly traded companies in the U.S. and Taiwan, and a handful of for-profit and not-for-profit enterprises.

Since 1979 Pete and his family have resided in Taiwan, Shanghai, Guangzhou, Hong Kong, Singapore, and Portland. He is a 1979 graduate of the University of Oregon, B.A. Political Science and is a Chinese speaker. Married 27 years, with four children, he's a flying and sailing enthusiast, enjoys reading history, and collecting antique books about Asia.

Obviously a successful and interesting guy, but the brief profile is far too brief about one very important part of Pete Nickerson's life. Some of best times a guy can have are sitting in the cockpit just chatting, running the machine efficiently, he says. He gets to enjoy those moments in a variety of cockpits, including a Stearman he co-owns, a DC-3 he is restoring, and a succession of piston and turboprop Commanders he has owned and flown.

Commanders have been a Nickerson family tradition. His father owned two different 500-series piston Commanders that he used in his aircraft and equipment leasing and financing business, and Pete has owned three himself a Shrike, a 690B, and his current ride, a 695B 1000. The 1000 is the One, he says.

Pete soloed when he was 18, but left flying for about 20 years to concentrate on his family and building a business. In 1997 he returned to the cockpit.

Plane The first airplane he bought was a Cessna Skylane, which he flew for about four years before looking to upgrade to a twin. His research included a discussion with Swede and Norm Ralston at Aero Air in nearby Hillsboro, Oregon, whom he had known from the days when his father was flying Commanders. Not surprisingly, the Ralstons talked up the virtues of a Commander, especially single-engine performance.

I had to agree with them, Pete says. Moving up to a turbine was beyond his reach at the time, so Aero Air found him a nice Shrike.

As his business took off over the next few years, Pete felt he finally had the time and the confidence as a pilot to move up to a turboprop. Again he turned to Aero Air, and bought a 690B. It was absolutely the right decision, he says. I love the turbine Commander. I'm six feet five inches, and I can sit up straight in the pilot's seat. And I like the fact that I can reach around and control the cabin door without having to rely on someone else to do it. I like the cockpit flow, and the high wing for visibility down and around the airplane.

Pete flew the 690B until business demands led to what he thought would be a long stint living overseas, so he sold the airplane. Two years later, however, he and his family were back in Oregon. I thought, I can live without an airplane, but that lasted only about three months before I got the hankering again, he says.

Pete thought another Commander would be effective treatment for that hankering, but he also evaluated King Airs. I looked at the B200 and C90, he says. The 200 is nice, but it was outside my budget. I could afford the 90, but just couldn't see buying it when compared to a Commander. It's 30 percent slower, and doesn't have the visibility. I just didn't see the advantage.

He went back to see Norm Ralston, who argued for a 695B 1000, the last Commander model produced. He had to wait quite awhile before one became available, but eventually Pete found himself the owner of a late-model 1000.

I just found all the things I like in the Commander, and not in the King Air, he says. The seat position, the cockpit flow, and the visibility. My mother and father were alive at the time and flew with me, and they loved the one step up into the cabin.

The other advantage of the Commander is cost, in a number of aspects. The purchase price was significantly less than a King Air, and the operating cost has been less as well.

Pete's use of the Commander is strictly personal. I fly to British Columbia to fish for trout, to Mexico for game fish, to South Dakota to hunt uplands game birds, and to follow Oregon Ducks football. My wife is from Columbus, Ohio, and is a Buckeyes fan, so we go to Ohio a couple of times a year, too.

He also volunteers his airplane and piloting services to Veterans Airlift, which arranges flights for veterans to visit medical clinics and family. His longest Veterans Airlift trip so far was from Manhattan, Kansas, to San Jose, California. He was able to do it nonstop in the 1000.

Along with the Commander, Pete co-owns a 1943 Stearman that he recently restored. My near-term project is to take a tour of all the lighthouses that remain on the west coast, he says. They are well known and easy to find, with airports around them. I'd like to do the tour in the Stearman.

He also has a DC-3A, and a dream. Some years ago he was flying from Los Angeles to Portland in the 690B with his long-time instructor, John Fjellman. John said that when he was running an FBO he thought about having a DC-3 in the LA basin to do tourist flights. I told him I had been thinking about flying a DC-3 to China and India. A plan was born.

It took Pete a couple years, but he eventually bought a DC-3 and started what has become a six-year restoration effort. The interior is the last major task remaining. My dream is to get a group of guys together, maybe make a six-month journey up the west coast of the U.S., then over to the east coast of Asia and on to India, with appropriate off-course trips, of course. He hopes to launch on his dream trip within the next five years.

Pete says he tries to find reasons and excuses to go fly, and it's apparent that he is highly successful at it. The Stearman and DC-3 fulfill the low, slow, romantic-glow side of the flying habit but, otherwise, the Commander is all I need, he says. I don't think I'm a jet guy. There are times when I'd like to be higher and go faster, but when the trip is done and I look at the bills I think, Gee, it sure is nice that this is half what a jet would cost. So I'm looking at this Commander as the airplane I will always have.