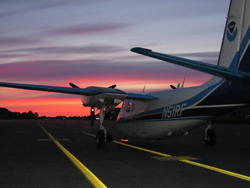 Twin Commanders are at their best when flying high and fast. The National Oceanic and Atmospheric Administration (NOAA) has long known that they also do a pretty fair job of flying low and slow.

NOAA has been operating two 500S Shrike Commanders for about 30 years, and in 2005 replaced a 690A with a 695A Model 1000 JetProp. The primary mission for the Twin Commanders is airborne snow surveying, which involves flying low and slow to electronically measure snow water equivalent (the depth of water that would cover the ground if the snow cover was in a liquid state). The data is used to predict stream flow and potential flooding when the snow melts in the spring. NOAA has been doing airborne snow surveys since 1978.

“The high wing is one reason we’ve had Commanders from start,” explains LCDR David Demers, chief of the agency’s airborne snow survey program and one of several NOAA pilots who fly the missions. In addition to great visibility, the Commanders have “really good slow-flight characteristics,” Demers says. “We get up in a lot of valleys, and we never know if we might have to turn around.” The ability to maneuver the Commanders at slow speeds gives pilots the confidence they need to do the job.

noaaFrom November through May each year NOAA conducts airborne snow surveys in 31 states and seven Canadian provinces subject to significant snowfall, including remote mountainous regions where the Commander’s attributes really shine. A typical mission in the Rocky Mountains or Alaska may start out in a high valley anywhere from 8,000 to 12,000 feet MSL and proceed down slope to either the snow line or to a predetermined end point.

The airplane is flown at about 500 feet AGL and from 100 to 130 knots ground speed. (Pilots have to disable the Terrain Awareness and Warning System when flying snow survey missions.) Even lower and slower would be better for the electronic instrumentation that “reads” the snow pack, but safety dictates a more conservative flight profile.

Loss of power when operating close to the ground at low indicated airspeeds and often with flaps partially extended is an obvious concern for NOAA pilots, but it is less of a concern in the Commander. “The 695A with Dash 10 engines certainly doesn’t lack for power,” Demers says. “Even on one engine it is no problem. If something were to go wrong, just put the power in and get away from the ground.”

The depth of snow pack can be measured easily enough, but snow can be heavy and wet or light and fluffy so depth is not a good indicator of how much water will be released when the snow melts. Knowing the water equivalent of snow pack is important, especially out west where snowmelt accounts for 80 percent of the water supply. It’s also critical information for anticipating flood areas.

The water equivalent of snow pack is measured using gamma detectors composed of sodium iodide crystals. Five crystals, each weighing 50 pounds, are carried aboard the Commander in detector packs. “Four of the crystals look down and one looks up,” Demers explains. “Natural terrestrial radiation given off by earth comes up and hits the sodium iodide crystals.” The crystals convert the radiation to an electric signal. The result is a Geiger counter-like measurement of radiation.

By comparing the attenuated radiation measurements from snow-covered terrain with benchmark measurements of the terrain with no snow cover (gathered in September and October each year), scientists can determine the extent of the water in the snow pack with accuracy of about one centimeter. That information is used by the National Weather Service to predict stream flow and potential flooding.

The gamma detectors can measure up to about 39 inches of water equivalent in snow pack. “That’s a lot of snow!” Demers says.

NOAA’s snow survey program is based at the National Operational Hydrologic Remote Sensing Center in Chanhassen, Minnesota, near Minneapolis-St. Paul. The 695A and one of the Shrikes is based at Flying Cloud Airport in St. Paul. The second Shrike is based at McDill Air Force Base in Tampa, Florida.

The Tampa-based Shrike had been assigned to photogrammetry work in support of FAA aeronautical charting activities, but today it is used for marine mammal surveys and as a backup for airborne snow survey work.

Eagle Creek Aviation in Indianapolis refurbished the 695A for NOAA when the agency acquired it from the U.S. Drug Enforcement Administration, and Eagle Creek continues to maintain it for NOAA.

Demers cites one more reason why the Commanders are ideally suited to the snow survey mission. “Just try to get 450 pounds of gear up a flight of stairs,” he says. “The Commanders make sense on a lot of levels.”