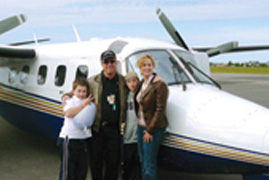 "My family has accompanied me for most all the flights, and love the adventure," Alper says.

Here are Alper's statistics for the trip: "Total flying time was 26.5 hours, covering 7,750 nm, at an average groundspeed of 258.6 knots. Most flight legs were between FL290 and FL340. This is the first flight for me in an RVSM-approved aircraft.

"The route was Bedford, Massachusetts, to Goose Bay: 3 hours; Goose Bay to Reykjavik: 4.7 hours; Reykjavik to Dublin, Ireland (with a stop in Donegal for customs): 2.5 hours; Dublin to Cannes: 2.9 hours. The trip back home was Cannes-Dublin-Reykjavik-Goose-Bangor, Maine-Bedford.

"There was not a single squawk on the airplane for the entire flight. Everything worked flawlessly. There is no other airplane for this type of flying that has such a terrific blend of performance and economy than the Commander."