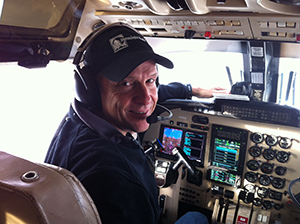 Try as he might, Mark Dziuban couldn’t help but end up a printer. “Both my grandfathers owned small print shops, and my father was a printer,” he says. “I did everything in my power to stay out of printing, but it was in my blood.” In the early Eighties, when the economy was down, Dziuban’s father got him a job — at a print shop, of course. The ink worked its way under Dziuban’s skin. Permanently. He stayed in the business, and in 1994 he and a partner founded American Litho to focus on direct mail and specialty catalog publishing. The company now employs 500 people, and continues to grow.

Printing is not the only passion that flows through Dziuban’s veins. He’s also a pilot and aircraft owner. Not just any aircraft, however — Dziuban flies a 695B Model 1000 Twin Commander that has the distinction of being the last one manufactured.

Dziuban has been in love with flying for as long as he can remember. He started taking lessons when he entered the workforce and began earning an income, but things changed when he got engaged. “The flying lessons ended,” he says.

About 18 years later he resumed his flight instruction, earning a Private certificate in 2000. The first airplane he bought was a Piper Cherokee Six. A Cirrus SR20 soon followed, then a Cessna 310R, and finally a Cessna 414. “I loved flying in a pressurized cabin,” he says. “Loved it!”

Before After The step up to pressurization changed Dziuban’s perspective. Long cross-country flights were more comfortable, and with the ability to overfly lower weather, more practical and less stressful. Soon, Dziuban began eyeing the next step up in capability and safety — turbine power.

He had long admired the performance and looks of Twin Commanders, but his partner in the step-up airplane, a non-pilot, was not so enthralled. They compromised on a King Air F90, which they bought in March 2008. Dziuban continued to operate the 414 while the King Air got a fresh interior and overhauled engines.

Dziuban stayed current in both the 414 and F90. In late 2011 the partners decided to put the King Air up for sale, and Dziuban’s 414 as well. Remarkably, both sold within a few weeks, and both went to Mexico.

Dziuban couldn’t be without an airplane for very long, however. He travels to the west coast frequently for business and pleasure, and for him and his wife to go by commercial air carrier with their dogs and bikes was difficult at best. Before buying the King Air, Dziuban had been looking at Commanders and had been in touch with Eagle Creek Aviation Services in Indianapolis. He decided to pay a return visit.

“I spent the afternoon poking around inside airplanes in the shop,” he said. “I spoke to the mechanics — great guys! No one had any negatives on the airplane. I asked about any Achilles heels. Everyone said there were none. When I went back home there was no doubt that I would buy a Commander.”

Bruce Byerly, co-owner of Naples Jet Center, had acquired the 695B from its English corporate owner at about the same time Dziuban went looking for a Commander, and a deal was constructed.

The airplane came from England in its original equipped configuration with Collins EFIS and Collins analog radios. Dziuban had Naples Jet Center fast-forward the panel to contemporary standards with a Garmin G600 Primary Flight Display/Multifunction Display and GTN 750 and 650 GPS/NAV/COM/MFD. What was once the most contemporary Commander flying had once again achieved that distinction.

And, as a highly useful bonus, the panel makeover provided Dziuban with an astounding 454 additional pounds in useful load.

“I’m so happy with it,” Dziuban said after his initial experience in the Commander. “It’s reliable, and the numbers are right to the book — almost 300 knots on 75 gallons per hour.

“The biggest thing was getting accustomed to the climb rate,” he adds. “I just couldn’t believe how it climbs. It’s a lot faster in climb than the King Air. And, above Flight Level 180 the King Air got sluggish. With the shorter wing it was hard to fly at altitudes above the low twenties. I’ve been flying at Flight Level 270/280 in the Commander.

“The F90 had no external baggage,” Dziuban says. “It was a hassle to lug bags through the cabin, and the passengers probably didn’t like looking at a cargo net with bags. It had great ramp appeal, but it had a tough cockpit to wiggle into. The pedestal with the FMS was in the way, and visibility from the cockpit was not good; the wing and engines were in the way. In the Commander it’s like sitting in a jet in terms of visibility.

“It’s very stable on instruments — I often hand-fly my approaches. It’s such a solid platform. The more I fly it the more I find out about it. The direct-drive engines are a lot different than the free turbines in the King Air. When you push the Commander throttles forward it’s a treat.

“My wife and I are cyclists,” he adds. “We can put the bikes in the airplane along with our gear and two Golden Retrievers. And, it makes seeing the kids on a weekend a lot more convenient.”

Support has been another strongpoint for Dziuban. “Eagle Creek and Naples Jet have a great, great bunch of guys,” he says. “Throughout the organizations the people have been welcoming, knowledgeable, and accommodating.

“I’m thrilled to death with everything I’ve experienced so far. I’ve been loving flying the airplane. I seriously believe I’m flying the best airplane in the sky right now.”

Those were Dziuban’s comments not long after taking possession of the 695B. Here is what he had to say months later:

“The airplane is everything I had hoped. It remains a pleasure to fly. I feel that the speed, combined with the efficiency of the engines and the gross weight of 11,800 pounds suits my mission most ideally.

“I have become quite proficient with the G600 and the GTN750/650. Those, coupled with the handling characteristics of the plane — which are very predictable — provide me with the confidence to shoot low approaches.

“If asked which airplane I plan on upgrading to in the future, well, I’m already there.”