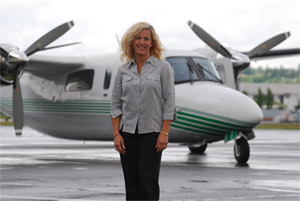 Go ahead, admit it: You don't just like your airplane, as in “I like the car I drive.” No, it goes much deeper than that. You can develop a genuine relationship with an airplane, as in “It is my trusted companion that sees me through good times and bad.” Twin Commanders are like that—familiarity with one breeds respect. Some might even say affection. Just ask Maria Plunket.

Plunket, a professional pilot based in Renton, Washington, has been flying the same 690B Twin Commander for 15 years. “It's a silly thing to say, but it becomes your friend,” she says. “It's reliable, always there for you. It takes you through thick and thin. It does everything you ask from it and more. Sometimes it still surprises me with its dependability and what it can do.

Plunket's aviation career began in 1990 when she earned her Instructor's certificate and began teaching at Tacoma Narrows Airport. One of her students bought a 685 Commander, and hired her to fly it. When he sold the Commander, she followed the airplane to its new owner. Meanwhile, the first owner, along with two partners, bought a 690B, and Plunket began flying it as well. Moving from the piston-powered 685 to the 690B turboprop “was an easy transition,” she says. “You just get to go a lot faster.”

In the next few years Plunket added a Shrike Commander, a Lear 24F, and several other Lear models to the stable of airplanes she regularly flew for owners. In 2005 she had her first child, a daughter, and resolved to cut back on multi-day trips and stay closer to home. These days she focuses primarily on Commander flying, including the 690B that is still owned by two of the three partners who bought it in 1995.

“That airplane has very rarely left the ground without me in 15 years,” she said. “When I had my daughter I took six months off. It was a big deal to find another pilot, and it was very strange to watch it take off with someone else flying it.”

For the first five years she flew it with TPE331-5 power. In 2000 the engines came up for overhaul, and the owners opted to upgrade to Dash 10Ts with Hartzell wide-chord props. The panel also was upgraded with a Garmin 530 and 430 and an Avidyne multifunction display. Although fuel flow increased about 9 percent with the Dash 10Ts, time to climb is considerably faster and cruise speed jumped 13 percent, meaning that on the same trip length you get there faster on less fuel. “We certainly benefit hugely with the Dash 10Ts because of the time that we save,” Plunket says. “We are very happy with them. To be able to fly down to Southern California in 3 hours and 15 minutes, and if winds are right get home in same time frame, is just great.”

Along with flying it, Plunket manages the Commander for the owners. “It's easy to manage, too,” she says. “No secrets or gotchas. Just things to watch out for, like replacing the batteries every couple of years. But it's easy to stay on top of and manage.”

As the owners' businesses and families expand, a larger, longer-range airplane may be in their future, according to Plunket. But she says she would “strongly urge them to keep the Commander” for the shorter flights they do now. “The boss has said many, many times it's such a great business tool. He can fly to a business meeting for a face to face, and get back in time to spend the afternoon at the office.

“Personally, I feel it’s just such a privilege flying the airplane,” she adds. “If I had the wherewithal to buy an airplane it would be a Turbo Commander. It's just so reliable. For what it can do and the price you pay to buy it and run it, it just seems to be unbeatable. It's been a fun, fun airplane.”