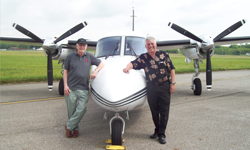 ONE COMPANY, ONE AIRPLANE

Airplanes have helped power the arc of Larry Allen's career from a young computer services technician to the owner and operator of a successful computer maintenance firm. That's not so unusual; business airplanes have been instrumental in the success of countless individuals and companies. What is different about Allen's story is that for the last three-plus decades his company's essential transportation tool has been the same airplane—a Twin Commander JetProp 980.

Allen picked up a new 980 from the factory in Bethany, Oklahoma, in May 1980, and immediately put it into intensive service shuttling his technicians around the country to fix customers' mainframe computers. At one point it was flying an around-the-clock schedule, with three pilots on rotation to cover the 24 hours. The travel schedule today is less hectic, but Allen's allegiance to the airplane that has served him all these years remains strong, and for very simple profit-and-loss reasons.

"I'm a big cheerleader for the Commander series, and the 980 in particular, because of the numbers and the maintenance," Allen says. "I talk to King Air owners, and owners of other turboprops, and we beat them by big margins."

There was a time when, because of the high utilization and the long trip lengths the airplane was flying, Allen considered making a change. "After we bought the 980 we looked at upgrading to a larger aircraft, a jet. Our average trip time was more than 2.5 hours, so a jet was something to look at," he explains. "But it didn't make sense from a cost and utility standpoint. We were going into a lot of small airports, short fields, even some farm strips—some customers, like a grower in south Florida, had short strips on their farms—and we could take the Commander into those.

"We were giving up a little on flying time compared to a jet, which was a cost, but when you consider the cost of maintaining the engines and airframe, we beat everything else hands down. Nothing came close."

Allen was a young computer technician when he went to work for RCA doing field-service work. His boss at the time was Larry Morse, who also was a pilot and instructor. Allen developed an interest in flying, and Morse took him on as a student. A few years later when RCA sold its computer services business, Morse transferred to another division within RCA while Allen went elsewhere.

In 1973 Allen founded Allen Myland, Inc. to service IBM mainframe computers. Obviously, a problem with its central computer was a big problem for a company, and Allen Myland was in the business of quickly correcting the problem. "We had found a niche in the market," Allens says.

This meant launching on a moment's notice to the site of the troubled mainframe. "We traveled throughout the U.S and moved hardware for companies. We needed transportation, and back then the airlines are not what they are today," he says. Allen understood that a company airplane was absolutely essential to the growth and success of his new venture.

He started with single-engine aircraft, flying VFR because that's all he was qualified for as a pilot. Then he earned his IFR rating, and the traveling increased. I was flying 400 to 600 hours a year in singles, then light piston twins."

On a trip to Caterpillar in Peoria, Illinois, he met Bob and Larry Byerly, who ran the local FBO, Byerly Aviation. Then, as now, Byerly was an authorized Twin Commander sales and service center. Allen remembers Larry Byerly remarking appreciatively about the Piper Navajo that Allen was flying at the time, then suggesting that he might want to consider a faster, more capable airplane, perhaps something like a twin-turboprop Commander 690. Allen agreed to a demo flight, and was convinced.

After researching other turboprop options and being "quite impressed with the numbers for the Commander," Allen bought a used 690. He also made a phone call—to his old boss, Tom Morse.

"He called me one night and said he had bought a 690 in Peoria, and now he needed help flying it," Morse remembers. "He said he was looking for someone who works on computers and knows how to fly. I told him I was teaching flying and enjoying it, and I wouldn't enjoy getting calls late at night and on weekends."

Allen persisted. "He has a great personality," Morse says of Allen. "This guy is incredible, and he convinced me. I said I'd fly for him for 6 months, he said 12 months, but it turned out to be 32 years."

Allen Myland operated the 690 for four years. "We were flying a lot, and we needed more capability," Allen says, "so we ordered a new one, a 980. We went to the factory to watch it being built."

Over the years the airplane has had several major updates including paint, interior, a switch to an Enviro Systems air cycle machine, and several major panel makeovers. The latest—a Garmin G600 retrofit. "If you saw the airplane now you'd say it had just come out of the showroom," Morse says.

All of the upgrades, as well as all maintenance and inspections, have been performed by Winner Aviation. Winner's location at the Youngstown-Warren Regional Airport in eastern Ohio is convenient to the airplane's base at Philadelphia International (Allen Myland is based in Broomall, Pennsylvania, just west of downtown Philadelphia), but Allen says the relationship goes far beyond proximity. "Their understanding of the engine and the aircraft," and their attention to cost control is an appealing balance, he says.

Morse, who has retired from flying the airplane but still manages the maintenance, also is a fan of Winner. "The personnel is the reason we stay with them," he says. "That's the whole key—who is in that shop. Really, it's the crew that makes the difference. They are a great bunch of people. After 32 years they have the ultimate insight of what's going on in there."

Allen Myland's business model has evolved from maintaining IBM mainframe computers to providing customers with customized data storage maintenance services. Because the work is more of a consulting nature than replacing hardware on site, the travel need is much reduced. Allen still flies it himself to call on customers, and occasionally for more personal pursuits such as getaway trips to the Florida Keys.

Now into his fourth decade of operating the 980, Allen apparently has no plans to do things differently. He's anticipating taking the engines to overhaul next year.