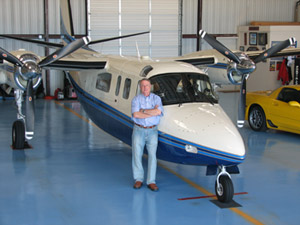 In business, when you find something that works, you stick with it. Jim Schwertner has stuck with the cattle trading business his father, Eugene Schwertner, founded in 1946, and today the Schwertner, Texas-based company is one of the largest livestock dealers in the nation.

Schwertner also has stuck with one of the tools that has helped him grow his cattle business—a Grand Renaissance Twin Commander.

Ten years ago Schwertner was looking to buy a new airplane. He surveyed the options and came to the conclusion that a Grand Renaissance Twin Commander was faster, more economical, and less expensive than the factory-new competition. “I felt like I was getting a new airplane,” he says.

After 1300 hours of flying it, he’s convinced it’s still the right choice today. “The reason I’ve kept it is because it’s such a good tool for me. A lot of the places I go are in rural areas with 3000- to 4000-foot strips, and no air carrier service within 300 or 400 miles. The Commander is almost as fast as Citations and other light jets, and burns a lot less gas. For what I do it’s perfect.”

“This airplane was built right,” Schwertner says, “and the Dash 10T engines are very reliable.” The airplane is maintained by Legacy Aviation at Clarence E. Page Municipal west of Oklahoma City. “They do an excellent job. They know the airplane. Some of the guys who work there built it. And I appreciate that the factory [Twin Commander Aircraft LLC] is supporting the Commander line.”

Schwertner is sticking with his Grand Renaissance. “I plan on keeping it awhile,” he says. “Every time I look at the alternatives, it still looks like the best.”