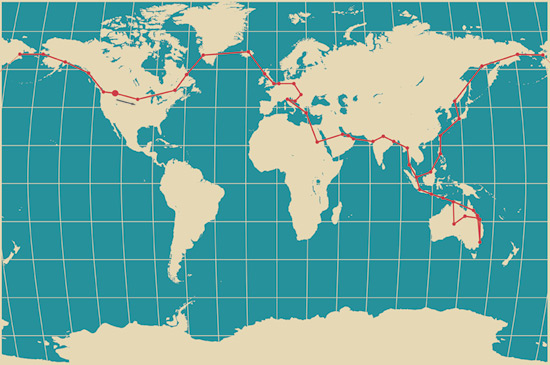 AROUND THE WORLD IN A TWIN COMMANDER

Jerry Severson did a lot of flying earlier this year in his Dash 10T-powered 690A Twin Commander. His logbook shows 115 flight hours in 8 weeks, for a total distance covered of 35,000 statute miles. That’s about 10,000 miles farther than flying the circumference of the earth at the equator. In fact, that’s just what Severson did—fly around the world.

From mid-May to early July, Severson, sometimes alone, sometimes with a changing cast of buddies, flew to 50 different airports in 24 countries. It was the trip of a lifetime. “Usually I was two days at most in any one place,” he says. “It was all about the journey, not the destinations, and it was one hell of a journey.”

His constant companion for the entire adventure—his Twin Commander—proved to be the ideal magic carpet. It had the performance to handle any airport conditions, climb quickly to cooler cruise altitudes, and make long, lonely segments seem relatively short. It had the legs to allow Severson to depart Aswan, Egypt, overfly a planned but undesirable fuel stop in Riyadh, Saudi Arabia, and continue on to Bahrain. And it offered up a spectacular, unobstructed view of a very big and very diverse world passing by below.

One more remarkable thing about the performance of his 690A: in all of that frequent, varied flying there was not one mechanical problem. None. Zero squawks.

A QUESTION OF TIMING

Severson spent a year carefully planning the trip, and the successful results speak to his preparation. Except that, early on, it looked like his timing was going to be all wrong. After departing from home base in Bozeman, Montana, and making stops at St. Cloud, Minnesota, and Quebec City and Kuuijuag, Quebec, he planned his next fuel stops at Narsarsuaq, Greenland, and Reykjavik, Iceland, before heading to St. Andrews, Scotland, and three days of world-class golfing.

But the ash cloud from the eruption of Eyjafjallajökull volcano in southern Iceland was drifting over the North Atlantic and Europe, forcing him to change the planned itinerary. “For the first 10 days of the trip I didn’t go where I wanted to go,” he says.

St. Andrews turned out to be a lunch stop—no time for golf, thanks to the approaching ash cloud. Next stop: Amsterdam, but that turned out to be a simple overnight, again because of the threat of ash. Then it was on to Berlin. Munich was next up, but that had to be scratched in favor of Budapest. “That was the end of the ash cloud,” Severson says. Back to the plan, but not the end of the surprises.

“From the Greek Isles I was headed to Luxor,” he explains, “but then Egypt threw an unpredicted sandstorm at me. Cairo was iffy so I went to Aswan instead. It turned out to be a treat. I ended up staying in the best hotel. I shot pool with the general manager, who upgraded me to President Hosni Mubarak’s suite—all eight rooms of it.”

When the sandstorm swept through Severson waited and wondered what the effect would be on his airplane. It was covered up, but tiny, windblown sand crystals find their way past any barrier. Severson decided to seek some advice. He called his maintenance facility, Eagle Creek Aviation Services in Indianapolis, where President Matt Hagans assembled a team to conference with Severson. They suggested several strategies including motoring the engines to blow sand out without heating and potentially melting it in the engines. “Everything worked perfectly,” Severson says. “That was a great resources to have.”

The only other unscheduled climatic event was a typhoon. “The typhoon season began June 1, and it tossed one at me,” Severson says. “I was going to stay in Muscat, Oman, but I had to leave after lunch because a typhoon was scheduled to come. Other than the ash cloud, the sandstorm, and the typhoon, all the other weather during the trip was pretty darn good.”

From Oman he flew to India, hoping to avoid Iranian and Pakistani airspace on the way. But published airways took him into Iran for eight long minutes. He was handed off to Iranian air traffic controllers, who turned out to be “very friendly,” Severson says. “I had no problems anywhere with ATC,” he adds. “They were outstanding through the entire trip, they spoke better English than the controllers in Latin America, and they offered very helpful changes.”

Severson had friends rendezvous with him at various places and ride along. “They would come for part of the trip, then leave and someone else would come along. And no one got sick. I did have a few days alone, which was dandy.”

His favorite stops? Europe—“I’ve flown there several times before and always enjoy it,” and, “I was 10 days in Australia. They drink beer well and they are proud of their convict heritage. Great people!”

Severson’s self-imposed limit of a maximum 900 nmi leg between stops (his 690A has standard 384-gallons-useable tanks) was tested on the flight from Seoul, South Korea, to the Russian seaport city of Vladivostok. To avoid North Korea he planned to head west and then north over the Peoples Republic of China. At the last minute China refused to grant an overflight permit. The alternative—flying to the east of North Korea—meant an 1100-mile leg, all over water. The prudent, though expensive, decision was to make an interim stop in Japan, and then proceed on to Vladivostok.

The finale of the trip was the Russian portion, exiting the country in far northeastern Siberia. “It was four long legs over lonely country with not many airports and alternates many hundreds of miles apart,” Severson says. He had to make an instrument approach in Russia nearly to minimums in driving rain, but fortunately did not have to divert to an alternate.

Severson used Universal Weather and Flight Planning for flight planning, ground handling, and other details during the trip. “It would be very difficult to do it all yourself,” he says. “One of their great recommendations was that they prearrange ground transportation to and from the airport. We could always get a cab to the hotel, but getting back to the airport would have been a corker. We would need to go back to the general aviation area, and we wouldn’t have had a clue how to tell a cab driver to get there.”

Severson has wanted to do an around-the-world trip for a long time. “I’ve known a number of corporate pilots who have done it, but not like this,” he says. “They make few stops and don’t see much. With my 900-mile limit I had a lot of stops.”

He says he’d do it all again tomorrow. “It was SOOO much fun—more fun than you can imagine. And the Commander was just excellent. It is a superb airplane in which to do something like this.”