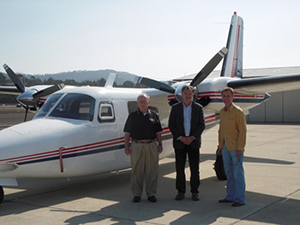 Jerry Hammes Mowbray is proud of the fact that he has owned and flown a 1963 680F(P) Commander since 1989 — 24 years. His airplane, one of 47 680Fs built with an optional hydraulically driven pressurization system, can rightly be called a classic. And although he uses it for reliable business transportation for his Reno, Nevada-based law firm, he takes pains to keep it in original configuration (see photo of instrument panel) and pristine condition.

Mowbray’s connection with Commanders goes back further than the 680F(P). His first airplane was a single-engine Commander 112TCA that he bought in 1985 and flew until buying the 680F(P).

To understand why Mowbray has an affection for Commanders, you have to go back even further, to 1953, the year he was born. That was when his grandfather, Romy Hammes, bought a 520 Commander, the first of two Commanders he would own. Mowbray remembers flying in the 520 when he was a young boy.

Jerry Hammes Mowbray with the 680F(P) that he has owned and flown since 1989. His grandfather, Romy Hammes, bought a 520 Commander in 1953, and then a 560 in 1961. Romy Hammes was a successful car dealer and entrepreneur from Kankakee, Illinois. Hammes recognized early on the advantages of business aviation, and bought a new Beech Bonanza in 1947, the year the distinctive V-tailed single was introduced to the market. Four years later he traded the ’47 Bonanza for a new one.

As his business interests grew in size, scope, and geographic spread, his need for reliable long-range travel grew. When Ted Smith certified the Aero Commander 520 as the first purpose-built multiengine business aircraft, Hammes took notice. In 1953 Hammes went to Aero Design & Engineering Co. in Bethany, Oklahoma, and bought a new 520, s/n 78, from the factory.

Hammes was not a pilot. He hired a former barnstormer, Lawrence Schilling, to fly the first Bonanza, and Schilling continued to fly for Hammes for as long as he operated airplanes.

Mowbray’s uncle, Jerry Hammes, who is the son of Romy Hammes, recalls that the 520 was “such a state-of-the-art airplane, a real head turner, that at every airport they went to, people would come up to look at the airplane. Even the mechanics would come out of their shops to look.”

Schilling kept meticulous records of all the passengers who flew on N4172B. The log for October 24, 1953 includes the signatures of seven passengers, including those of a young Senator and his wife, John F. and Jacqueline Kennedy, who were visiting Kennedy’s sister in Wisconsin.

Also aboard that day was The Reverend John J. Cavanaugh, C.S.C, the President of Notre Dame University. Romy Hammes was a devoted Catholic and supporter of Notre Dame. His generosity, which has been sustained by Jerry Hammes, is reflected in the Hammes name on several buildings at the University.

Mowbray prefers the original, functional look for the instrument panel in 1963 Commander. In late October 1960 Hammes lent his airplane and pilot to another Kennedy — Rose, John Kennedy’s mother. She spent several days flying around the Midwest in the 520 campaigning for her son, who was seeking the presidency. John Kennedy sent a note of thanks to Hammes.

Jerry Hammes has complied a fascinating online account of the family’s history (www.jerryhammes.com). It includes photos, documents, and descriptions of the Bonanzas and Commanders, the family’s travels, and notable passengers.