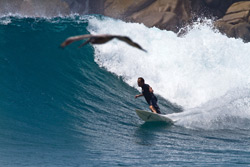 Any day that you can combine business with flying is a good day. And if the business you are flying in support of is surfing, surely that makes for an extra-good day. Jeff Berg—lifelong surfer, successful surfing entrepreneur, and chief pilot of two Twin Commanders—is enjoying lots of extra-good days.

One of the companies he is actively involved with as owner/investor is Surfline, which he describes as “the 800-pound gorilla in the world of surfing and action sports.” The company's website, www.surfline.com, is one-stop online shopping for surfing news, features, gear, travel, photos, videos, and most important, surf reports and forecasts for beaches around the world.

Someone has to research the exotic surfing destinations that Surfline.com reports on, and who better than Surfline's chairman and chief pilot. “That's what got me started in flying,” Berg says. “I started going with friends who were flying regularly to some pretty remote places in Baja, Mexico, to surf. The more I did it I thought, 'This is pretty cool.' We were escaping the crowds in California and finding phenomenal surf with very few people around.”

Berg grew up surfing in the Atlantic Ocean off Ft. Pierce, Florida. “If you have any ambition as a surfer, you start thinking, 'Where am I going to go to surf any real waves?' So you go to the Outer Banks, Puerto Rico, the Caribbean, Costa Rica, Central America, Hawaii, Asia. There is great surf everywhere, a lot of it undiscovered. That’s part of the fun and adventure. That’s where with a plane you can do some pretty interesting things.”

As a teenager Berg used to fly with his younger brother, but Berg's aspiration to become a pilot himself was set aside as he pursued an entrepreneurial career. His interest was rekindled when he hooked up with friends who were flying to good surfing destinations. “I thought, 'Enough is enough.' I really need to do this.”

As soon as he earned his Private certificate Berg began renting Cessna 172s to build time and experience, but he also quickly transitioned into multiengine and instrument training. His fly-and-surf mentor was Mike Castillo, whom Berg describes as “a Baja bush pilot legend in the surf world.” Castillo had once owned a piston Twin Commander, and his praise of its capabilities was not lost on Berg when he began to research an airplane to buy.

“The more I flew and talked with these friends the more I realized that the perfect aerial vehicle for missions was an Aero Commander,” he says. In 2003 Berg bought N62LL, a 1958 500A Commander that in 1963 was converted to a 500B by replacing the Lycoming IO-470M engines to IO-540-B1Cs. A year or so after buying it Berg had it repainted with a dramatic ocean-blue curling wave cascading across the fuselage midsection.

The Twin Commander has turned out to be a good choice. “It has the right combination of payload and performance, especially short-field takeoff and landing,” Berg says. “We’re loading up people and boards and equipment, and often camping equipment as well, and flying over a good bit of water and into short desert strips.

“The two engines are great, the payload is great, and the ability to get in and out of tight strips is really important. The high wing helps, too, for exploring and doing aerial photography. The extra clearance also is good when operating into and out of dirt strips.”

The airplane is equipped with long-range tanks (210 gallons), good for seven hours or more of flying. “I can do 1,000 nmi with room to spare, which is pretty nice,” Berg says. And thanks to an STC that allows surfboards to be stowed in the tailcone, he can take up to six surfboards on his trips. “That, plus the room it has in the cabin, makes it hard to beat.”

Along with trips to Baja , mainland Mexico, and Central America, Berg has used the Twin Commander to find good surfing in the Caribbean, especially Puerto Rico, the British Virgin Islands, and the Bahamas. “I fly over a lot of water to get there,” he says. “I wouldn’t do it in a single. And with some other twins I couldn’t get in and out of some of the strips I fly to, especially with the payload of the Twin Commander. It's the best surf SUV that I’ve found.”

Early in 2010 Berg doubled the airborne research fleet when he bought a Commander 1000. “I got the disease—more speed and range,” he says. “ I looked at all the alternatives, and given where I go and what I do there was nothing that could touch it for the money. The range and speed are unbelievable. Twice I've gone nonstop across the country, from Carlsbad, California, to Ft. Pierce, Florida, and landed with close to an hour of fuel left.

“I've flown from Long beach, California, to southern Mexico, 1,600 nmi nonstop, on a surf mission. We took off with four big guys and a lot of gear and flew close to six hours.”

Berg still calls Ft. Pierce his primary residence—his parents and two of his brothers still live there—but he also sets up camp in San Clemente, California, during south swell season (summer), and ranges wherever good surfing takes him. “In the summer I try to set myself up so I can work just about anywhere. I'm a pretty passionate surfer, and the Pacific is much better than the Atlantic for surfing in the summer. During the winter the Caribbean has fantastic surf, so I just try to strike.

“It helps that Surfline.com is the best surf forecast service in world,” he says. “With that and the best aviation hardware, we can do surgical strikes. We can plan knowing there will be a swell hitting and that we'll get really good surf. Often we're taking pros along, generating content and photos for the website. Recording swell events is something surfers love to consume. We try to accommodate them.

“Surfline is cataloging and databasing pretty much all the surf breaks in the world,” Berg says. “That means cataloging most of the beaches in the world. And there is no better way to do that than with an airplane.”

Buying the 1000 has not diminished Berg's enthusiasm for the piston Commander. “I have no intention of selling it,” he says. Having the two Commanders gives him a choice—the 500B for shorter trips and especially into smaller unimproved strips, and the 1000 for the long hauls.

Berg's decision to start flying is working out quite well. The Commanders have greatly enhanced his ability to pursue his passion for surfing as well as the business opportunities that flow from that passion. “I plan to just keep flying and learning and enjoying it,” he says. “I want to keep becoming a better pilot, keep getting utility out of the planes. Right now I’m a pretty happy camper.”