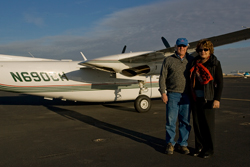 Hank Boni likes having two motors on his airplane. Not just any two, however. After suffering three engine failures in piston singles and twins, his clear preference is for turboprop power—the Honeywell TPE331-10Ts on his and his wife Yvonne’s 690B Twin Commander. “They just don’t quit,” he says, then adds, “but I know that if one fails, the other will do a pretty good job. The airplane will climb at more than 1,000 fpm on one motor.”

Boni’s first engine-out experience was in his Cessna 182. He had just taken off, and at about 250 feet the engine suffered a catastrophic failure. Boni managed to avoid the hostile terrain and land safely on a road.

The second and third failures were in piston twins. His Piper Seneca lost an engine on takeoff, and Boni says it took him 15 miles to climb to pattern altitude on one engine. The third failure was in his Cessna 340. “It was a nice airplane—until I lost an engine,” he says. That incident ended safely as well, but Boni says he learned something from it. “An underpowered twin is more dangerous than a single.”

Hank & Yvonne BoniA retired general dentist with a successful 35-year practice in Bend, Oregon, Boni met and eventually married Yvonne, whose husband had died some years earlier. She had kept her first husband’s 690B Twin Commander, and was using a contract pilot to fly it. But the airplane was coming up on engine overhauls and needed other expensive upgrades, so she decided to sell it. Boni had the P210 at the time and the couple began using it, and later the 340, to travel between their houses in Bend and Borrego Springs, California.

When she owned the Commander Yvonne was a customer of Aero Air, an authorized Twin Commander service center in Hillsboro, Oregon. Boni remembers arriving on the Aero Air ramp in his P210 and having company President Kevin McCullough look at it and, with a big smile on his face, say, “Hank, what are you thinking?”

“He was a big influence on me,” Boni says. With McCullough’s help the Bonis looked at a variety of upgrade airplanes, from single-engine turboprops to light jets. Eventually they settled on a Twin Commander—the very one she had owned and sold earlier. Nostalgia for the airplane, familiarity with its considerable capabilities, and trust in the reliable Honeywell engines convinced them to buy it back.

Over time and with Aero Air’s help, the Bonis brought their Twin Commander up to contemporary maintenance, reliability, and comfort standards. “Little by little we’ve been replacing everything, doing whatever we need to do,” Boni says.

One of the first items on the list was overhauling the TPE331-10T engines, which turn Hartzell wide-chord propellers. The performance with the Dash 10Ts is remarkable, according to Boni. “It used to take us about five hours to fly from Bend to their house in Borrego Springs, California in the 340, including a fuel stop,” he explains. Now, cruising in the mid-twenties at 307 knots true airspeed, it’s a two-hour-forty-minute nonstop flight for the couple.

The one area of the airplane that remained relatively static was the panel. That changed in a big way earlier this year when they had Aero Air replace the stock panel with one that is almost all electronic, centering on dual Garmin G600 electronic flight and multifunction displays.

Boni says the panel upgrade was driven by lack of reliability in instruments and avionics, including inflight failures of the electromechanical flight director system. He specified a dual installation because he typically flies with John Fjellman, a highly experienced Commander pilot who trained him in the Twin Commander. “I turn 65 in a week,” he says, “and I’m realistic about flying. I used to fly by myself all the time, but having another pilot in the right seat is the safe thing to do when I’m carrying precious cargo—my wife.”

Boni is diligent about staying proficient. “I fly at least once a week,” he says, “but if I miss a week I’ll take a friend and go do some tune-up work. I feel so much safer in this airplane,” he adds. “It’s a tough airplane, and relatively easy to fly as long as you pay attention to things.”

Boni has high praise for the work Aero Air has done on their airplane. “They’ve been wonderful with the quality of their service, their honesty, and their communication,” he says. It’s not finished, either—the Bonis plan to have the Twin Commander painted next year, and the interior refurbished.

Traveling in their Twin Commander is a passion for both he and Yvonne, and they use it extensively, logging 150 to 200 hours a year. Since they’ve had it upgraded it has proven to be “incredibly reliable and cost-effective,” Boni says.

“We have three cars, all of them pretty old, but they have low mileage because we fly all the time,” he says. “We refer to it as our pickup truck because it carries everything—people, bags, dogs. I've gone on hunting trips and we've had as many as four or five dogs in the cabin,” he says. “Even furniture. Weight usually is not a problem.

“The airplane serves our needs perfectly. I don’t think we’ll ever get rid of it.”