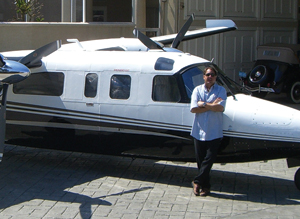 Greg Farbolin is a member of the family that founded the HoneyBaked Ham chain of retail stores. He was with the company for more than 20 years, working on special projects ranging from opening a new processing plant and developing groundbreaking point-of-sale software, to scouting out locations for new retail stores. That last task involved using the company airplane, both logistically and strategically.

“I would fly to a city, say Memphis, then fly around VFR to find houses with swimming pools,” he says. Swimming pools meant it was a good place to start looking at opening a HoneyBaked Ham store.

Today Farbolin is a shareholder in one of the company’s divisions, which has about 260 stores in 16 states. He lives at Spruce Creek near Daytona, Florida, in a spectacular hangar home built by veteran Nascar racer Mark Martin. Farbolin says he spends his time at Spruce Creek “trying to do as little as possible, but I’m not very good at it.” Among other activities he operates several holding companies and an office complex at Spruce Creek. He bought it because the airport’s Downwind Café, which is in the complex, was about to lose its lease and close. Farbolin acquired the building, resuscitated the café, and then turned it over to the operator.

While at HoneyBaked Ham Farbolin flew company aircraft ranging from piston singles to Citations. (He also flew for Eastern Airlines for a time.) He’s also owned a variety of aircraft, and one of his favorites was an Aerostar 601P. “I loved flying it,” he says. “I bought it for $150,000, and spent $75,000 in maintenance the first year. I thought it would then settle down, but the second year I spent $75,000 on maintenance. I bought the Commander because I couldn’t afford the Aereostar!”

Why a Commander? Farbolin is an acknowledged performance junkie—“I like getting from here to there as quick as I can,” he says.” The Aerostar satisfied that craving, and Farbolin saw much the same in the Commander. “Once you fly an Aerostar, and you kinda like what Ted Smith does, his mission, well, the Commander is another one of his birds.”

It’s the first turboprop he has owned. “The Commander, especially with Dash 10s, may have props, but it’s basically the same thing as a jet. It’s quite the rocketship,” he says appreciatively. “And it’s an airplane that’s hard to get up to gross weight, especially if you have a 90-pound wife like I do.”

Farbolin is on his second Twin Commander. His first was a 690A with standard TPE331-5 engines that he bought from Eagle Creek Aviation Services in Indianapolis. He flew it for about five years before going back to Eagle Creek to trade for a 690B with Dash 10T engines. He had the airplane painted and the panel upgraded with the latest avionics including TAWS, EGPWS, TCAS-II, and WAAS.

Although he’s never suffered a loss of power in either of his Commanders, Farbolin appreciates the inherent safety of two engines. “I’ve got a couple of buddies with PC-12s. They can argue all day long about the reliability of turbine engines, but I ask them, ‘Okay, we depart an airport in the mountains at night with our families aboard, and lose an engine. What do we do? Me, I’m going to do nothing. Just keep climbing at 1,000 fpm. What are you going to do?’”

He uses his Commander to go to HoneyBaked Ham meetings, and on personal trips including to Ocean Reef south of Miami, where he keeps a boat.

He also does the occasional special mission. Recently Farbolin was having breakfast at the Downwind Café and learned that a three-year-old girl in Savannah, Georgia, needed to get to the New York City area for immediate treatment of a serious medical condition. Severe weather in the Southeast was making it difficult to find an Angel Flight volunteer pilot willing to do the trip. Farbolin, who has two young children of his own, stepped forward.

With tornado warnings in the Daytona area, Farbolin departed for Savannah, where the weather was bad enough. Forty-five minutes after landing at Savannah, and with the weather clearing, the Commander took off for Teterboro with Farbolin, six passengers, and bags aboard. Just over two hours later he touched down at TEB.

Farbolin returned to Daytona the next day. The child underwent surgery in New York, and Farbolin got word that it was successful. According to the pastor who with the child and her family on the flight to New York, Farbolin had some help from a competent copilot.

“Do you know He changed the weather right before our eyes, not just in Savannah but all the way to New York,” wrote Jay Sipes, associate pastor of the Corinth Baptist Church in Keller, Georgia. “The pilot left Daytona in a tornado watch and very bad weather to only see it break as he landed at Savannah, which is exactly what we asked God to do...Thank You Lord, Thank You.”