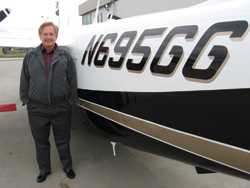 Gene Good has been flying Twin Commanders for two decades in support of Golden Giant, his Kenton, Ohio-based metal-building manufacturing and erecting company. He has logged more than 4,000 hours in the two he has owned. “The aircraft is a major tool in my business,” he says. “They have helped build the business, no question about it.”

In 2000 he traded his Dash 10T-powered 690B for an Eagle Creek Aviation Services-built Grand Renaissance 1000. Five years later he had Eagle Creek install Meggitt EFIS and electronic engine instrumentation displays along with a Meggitt 2100 Digital Flight Control System, and certify the Grand Renaissance for RVSM operations above FL290.

“I probably average on the north side of two-hour legs on my flights, although some go three-and-a-half hours or more,” Good explains. “I regularly see 300 knots true airspeed and 76 gallons per hour block-to-block fuel consumption.”

His business flights often range to the Atlantic and Gulf coasts, where he sells and erects dry-rack boat-storage buildings. He also owns a home in Ft. Myers, Florida, that he and his wife travel to often. There was a time when Good felt a need for more speed on those longer flights. He thought seriously about buying a Cessna Citation, and worked the numbers. He calculated that the 1,000-nautical-mile flight to Ft. Myers would take 30 minutes less time to fly in a jet compared to his Twin Commander, but at more than twice the total fuel consumption. These days, that could be $3,000 to $4,000 more round-trip. Good concluded that the economic pain of flying a jet—more fuel, higher insurance premiums, and training for a type rating—would far outweigh the relatively modest gain in speed. “It makes no sense to consider another type of airplane just to gain a half-hour in time for that kind of increase in operating costs,” Good reasons.

After eight years of flying the Grand Renaissance, Good says his opinion of it hasn’t changed since the day he bought it. “I’m real satisfied with the airplane,” he says. There have been no major maintenance issues, and Good says he has never had any engine problems whatsoever. “Being a business owner, the aircraft is used 95 percent for business, and it is money well spent,” he says.