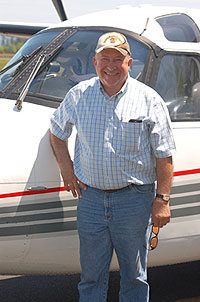 When Earl Lunceford had his medical device businesses, he traveled the country in the company airplane—a Lear 35A. Along with owning and operating the company, Lunceford flew the Lear. So it was no surprise that when he sold the business, he went looking for a personal airplane that he and his wife could use to range far and wide from their Coeur d’Alene, Idaho, home.

He considered a single-pilot Cessna Citation, but quickly concluded that it was too expensive to operate for personal use. He surveyed the field of promised very light jets (VLJs), but didn’t particularly like what he saw. “Too many limitations,” he says. “The way I see VLJs, they have a fuselage the size of a Beech Baron with the price tag of a nice Lear 35. You can’t fill them with fuel and carry people, or vice versa. They didn’t appear to meet my needs.”

He turned his attention to turboprops—Beech King Airs and Piper Cheyennes, as well as Twin Commanders. Although he had no previous experience with Twin Commanders, he ended up buying a 690B, one of the last ones manufactured before production shifted to the JetProp series.

Lunceford is the third owner. The previous owner had it from 1979 to 2006, and took meticulous care of it, according to Aero Air’s Ken Molczan. Molczan certainly is familiar with Lunceford’s new ride—he picked it up from the factory in 1978 when it was built, and has maintained it ever since for each of the three owners.

Lunceford’s airplane served as the prototype for Twin Commander’s new Fuel Quantity Indicating System (see story above), and now Lunceford is enjoying the benefits. “It’s working quite well,” he says. “The quantity displayed is accurate, and the cockpit presentation is real nice.”

Aero Air also installed a new panel and avionics suite for Lunceford, including a Garmin 530 and 430 with an Avidyne multifunction display, TCAS, and XM Satellite-delivered Nexrad weather radar.

As this was being written Lunceford had been flying the Twin Commander for a few weeks, mostly on transition training flights with Aero Air as he prepared to attend FlightSafety International’s Twin Commander pilot initial course. But even with that limited exposure, he is convinced he made the right choice. “The Commander does everything I need it to,” he says. “It’s single pilot, it’s fast, and it gets in and out of short strips. It’s a fantastic all-around airplane.”