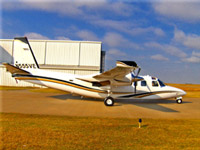 Domingo Minutti was born and raised in Mexico, but his name is an obvious clue to his heritage. “I’m a fourth-generation Mexican with Italian ancestry,” Minutti explains, and to further make the point he notes that his middle name is Stefanoni. That multi-cultural bloodline explains Minutti’s business—he owns The Italian Coffee Company, a franchiser of premium retail coffee shops.

Founded in 1996 in Puebla, The Italian Coffee Company (www.italiancoffee.com) has grown to some 400 locations throughout the country.

Minutti makes the rounds to visit retail stores in a 690B Twin Commander. It’s the third Twin Commander he has owned in just six years. His first Commander, which also was his first airplane, was a 690A bought in 2002. It opened up a new world of mobility and convenience for Minutti, and that got him thinking about a jet. He moved on to a Cessna Citation 500, but soon came to rue the operating cost of the Citation compared to the Commander.

“Our normal trip is about 200 to 300 miles,” Minutti explains. “The Citation was not right for that. The fuel cost was too great. A Commander uses half the fuel of the Citation.”

Minutti has a house in San Antonio that he travels to once a month, and his partner has a residence in Houston. Those are convenient to Legacy Aviation Services, Inc., a Twin Commander factory-authorized service center located at C.E. Page Airport in Yukon, Oklahoma, west of Oklahoma City. Minutti went to Legacy’s Raul Gomez, who had sold him his first Commander, and traded the Citation on a Dash 10T-powered 690B.

“He was very happy with the airplane,” says Gomez, but when the Meggitt MAGIC panel upgrade started to appear on Twin Commanders, Minutti had to have it. He returned to Legacy and bought his third Commander, a pristine 690B with Dash 10T engines; Hartzell Wide-Chord propellers; Meggitt EFIS, electronic engine and instrumentation display, and 2100 Digital Flight Control System; dual Garmin GPS systems; and other must-have goodies.

They base the Commander at a private strip in Atlixco south of Puebla. The 4,400-foot-long runway sits at 6,000 feet MSL and, according to Minutti, the Commander is the only airplane they considered that can depart from the strip at max takeoff weight.

Minutti employs a professional pilot for the Commander, but he has his pilot’s certificate and has logged about 400 hours flying right seat in both the Citation and the Commanders. That hands-on perspective played prominently in his decision to return to a Twin Commander. The power and handling qualities inspire confidence in a pilot, according to Minutti. “A Commander is a Commander,” he says.