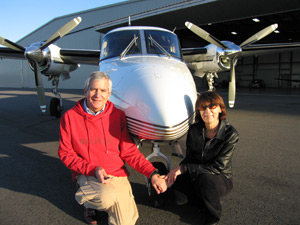 By way of introduction, I have been a pilot for 28 years (multiengine ATP, Commercial privileges ASEL) and my wife Jann holds a Private Pilot certificate. I had a Cessna 172 for about 13 years, and it basically enabled my relationship with Jann (who was working as a photojournalist in Halifax, Nova Scotia, while I worked in a similar capacity for AP in Boston). After a brief hiatus, we moved to an A-36 Bonanza, then a 58 Baron. I fly occasionally for work, mostly for personal use, and fly about 150 hours a year. I am the founder and CEO of a software company employing 35, and have a Master’s and Bachelor’s from MIT. Flying has been an important part of our lives together, and learning about aircraft systems, weather, and flying are passions for me.

We took the Baron to Seattle, the Grand Canyon, Tortola in the Caribbean, and did a trip up the west coast of Greenland and over to Iceland that was likely the most fun flying I have ever done. We want to do some long trips (Alaska, Europe) and so started looking to step up about five years ago. As part of that we were involved in the Eclipse debacle, but we were determined not to let that be a defining moment about flying for us, so we went on to look at the usual suspects: Cheyennes, King Airs, Mu-2’s, Citations and CJs.

We did a lot of research and each had issues—parts, low speed, a very demanding wing, REALLY big fuel burns, high purchase expense. I do a pretty thorough research job, and for most of these candidates I got POHs, studied the specs, talked to owners, etc. We were looking for something turbine powered with long range and, preferably, with avionics sufficient for Eurocontrol and Atlantic crossings, so HF was a plus.

REACHING OUT I reached out to aviation people I respect, and Al Bishop, a Part 135 operator in the Boston area advised me to check out the Commanders. He said that for my mission lengths and the speed, range, and fuel efficiency requirements, there was no finer flying aircraft. He put me in touch with Dr. Mike Alper, also in the Boston area, and Dr. Alper was kind enough to take Jann and I for a flight in his gorgeous Commander 1000. He has also done more than 20 crossings to Europe, and that was just the kind of flying we wanted to do.

What appealed to us? We are both visual people and when we fly to someplace new and interesting, we like to see it from the air. The view from a Commander is just plain superb—no huge engine nacelles to look around. The Honeywell engines are an elegant, reliable design, and in the world of turbines are very efficient and have very long TBOs. Single-engine performance is excellent, as is range with the large tanks available in the 840/980/900/1000 Jetprops. Short-field performance is excellent, too.

Next I touched base with Twin Commander Aircraft, and they were kind enough to send me a stack of back issues of Flight Levels. I also got in touch with Bruce Byerly of Naples Jet Center, and on a trip south in our Baron Jann and I stopped in at Naples and saw a few aircraft. We then attended the 2009 Twin Commander University where we learned a lot, met a bunch of owners, and saw many fine aircraft.

A few months later Bruce advised me that a Boston-based 980 impeccably set up by Mitch Sayare had come on the market, and it had long-range tanks, HF, and excellent maintenance records. After a thorough pre-buy inspection at Naples Jet Center, N218MS was ours. We added a Garmin 330D ES transponder to satisfy Eurocontrol exemption requirements, upgraded the Garmin 530 to a 530W (WAAS certified), and added a 406 mHz ELT.

So far we’ve taken the Commander to a 3000-foot, very narrow strip on the smallest of the Cayman Islands, multiple trips to Canada and Washington, and are planning trips to Jamaica and Europe.

JUST AS WE HOPED What do we love about it?

It has a great wing. Nice honest handling, crisp responsiveness for such a large aircraft, excellent low-speed handling and high-speed, high-altitude performance. Climb performance is excellent (we usually fly in the high 20s just under RVSM territory). Being able to easily move about the cabin (versus the Baron) is a big plus for Jann, and the back seat is (I’m told) a terrific place to enjoy the flight. Everyone who has had a ride in it loves the aircraft. The view outside is terrific, just as we hoped.

Of course the winds are stronger up high, and that can work for you and against you. On a trip back to Boston from KOPF we saw 421 knots groundspeed; not bad for 500 pph. Standing up the throttles for takeoff is fun, too, as the acceleration pushes you back in the seat.

We love the industrial strength systems, particularly the anti- and deice. The heated baggage compartment is so large it rivals the entire cabin of our original 172. We have been very impressed with the network of Service Centers. Having had “teething issues” work done at the Naples Jet Center, Mid-Continent Airmotive, and Northeast Air in Portland, Maine, we have uniformly run into experienced, knowledgeable individuals with real respect and affection for the aircraft. Similarly, my experience with instructors has been very good, and the Boston area aircraft owners are a great group as well. The Commander community is a real asset for the aircraft.

There have been some surprises. There are a lot of new, more capable and more complex systems than in our Baron. (Part of what I enjoy is learning how engineers solve various needs in the aircraft.) Holding power on landings, and making TINY adjustments to the power when landing were different as well. I’m on the 9th revision of my checklist, and I finally have memorized all 46 overhead switches. There is somewhat more bureaucracy compared to the Baron (the International Registry of Mobile Assets, and Eurocontrol requirements for Mode S Enhanced to name two). And with the more than 52-foot-long wingspan on the 980, a bigger hangar was needed.

So let’s see how the 980 stacks up against a jet. It has much better short field performance, it’s almost as fast, it has much better fuel economy and load, and no bad surprises of any kind. Plus there’s the great, roomy cabin and a great support community. What’s not to like?

We love the plane. It is truly going to be our magic carpet for our next phase of flying.