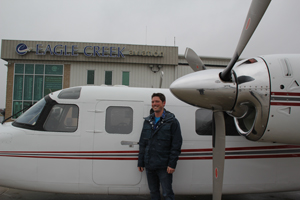 Chris Kimball is proof positive that a fat logbook full of multiengine and turbine experience is not an absolute requirement to move safely and swiftly into a single-pilot Twin Commander cockpit.

Kimball, 26, had just over 600 hours total time and all of 10.5 hours multiengine time when he began flying 690JK, the TPE331-10T-powered 690B owned and operated by Belt Tech, the Washington, Indiana-based, family-owned company where he serves as vice president.

He’s on his own now, flying Belt Tech people on business missions, and family on vacation trips to such places as Las Vegas; Sequoia National Park in central California; and “bucket list” destinations like Breckinridge, Colorado, for winter snow and the Caribbean's St. Maarten for winter sun.

“We love it,” Kimball says of the Commander. “To this point it's doing everything we wanted it to do—take six adults anywhere, and keep us out of the weather. And it's done it every time.”

Kimball’s fast track to flights levels flying may not be so surprising given his history. On his 16th birthday he skipped school to make his first solo flight. He did it in his father’s Piper Warrior. Over the next year he continued his flight training, and he also began an apprenticeship as a mechanic at a local aircraft maintenance shop. On his 17th birthday he took his Private Pilot check ride, and a little more than a year later earned his Airframe &amp; Powerplant certificate. Fast-tracking once again.

Kimball stayed with the maintenance shop for the next couple of years, he got married, and he quit flying. Not because he lost interest, however: “I didn’t want to do it if I couldn’t do it right,” he says. “There were too many guys at the airport who flew just enough to get themselves in trouble.”

He eventually joined his father-in-law’s company, Belt Tech, which services and maintains heavy-duty conveyer systems for power plants, mining companies, and other industrial operators. Like other Belt Tech employees, Kimball was making long, overnight drives to visit branch offices and customers. That led to a conversation. “We got to talking,” Kimball says. “If we had an airplane we could be there and back the same day. We could make better use of our time.”

Kimball got current, Belt Tech bought a Piper Saratoga, and he became the company pilot. Within a few months it became clear that cross-country business travel was nearly impossible without an instrument rating. “We couldn’t fly much between November and March,” he says. One experience in particular convinced him to get the IFR rating. “I had a business trip with the sales manager and one other guy, and some weather came in. We were sitting there waiting for it to lift. The sales manager got a call—his 4-year old daughter had been in an accident, and they were transporting her to the hospital because she had a broken neck. We were stuck in Missouri because of a low-pressure system, yet 15 miles to the east it was VFR. I said, ‘I can’t go guys. I can’t do it.’ The sales manager rented a car and drove home.”

While he was waiting for the weather to improve Kimball went online and booked an accelerated IFR training course. A few weeks later he flew the Saratoga to Beaufort, South Carolina, and fast-tracked the rating.

With the capability afforded by Kimball’s IFR rating, Belt Tech increasingly relied on the Saratoga to support its business. By the end of 2012 he had spent nearly 400 hours flying the big single. Flying saved hours of driving and nights spent in hotels. The airplane had a new engine and good avionics and fulfilled the mission requirements well enough, save for one critical redundant system—a second engine. The logical solution was to upgrade.

In the summer of 2011 Kimball earned his Commercial certificate with multiengine rating in Winter Haven, Florida. His father-in-law met him there and, following the fast-track plan, spent an intensive two weeks earning his Private pilot’s certificate.

Kimball surveyed the field for a piston twin that could deliver the desired range, payload, performance, and reliability at a fair price. Value was a primary criterion, but Kimball was disappointed with what he saw. The search expanded to encompass turboprops—or, more accurately, some turboprops.

“To be honest, I never really liked Commanders,” Kimball admits. “I had no idea what they were. I knew King Airs and Conquests. One day I said it’s not really fair to say I don’t like them. It was a preconceived notion. I just didn’t know enough about them. So I added Commanders to my research.”

It opened his eyes. “They are not much smaller on the inside compared to a King Air 90, they just don’t stand as tall on the ramp” Kimball says. The clincher was Aviation Consumer performance comparisons. “If you compare the performance of a Commander with a King Air, there is no comparison,” he says. “The Commander is a pretty awesome airplane. As a pilot-owner I’m going to take performance over the nostalgia of a King Air.”

Kimball was convinced. “It was nice to learn about Commanders and appreciate what they have to offer. It’s a cool airplane. Nice lines, too, like an Aerostar, which also is a super performer. I had preconceived ideas until I educated myself, and realized the Commander has a lot more to offer than anything else out there.”

Prior to purchasing 690JK, Eagle Creek’s Jim Worrell offered Belt Tech a demo flight with Maher in Eagle Creek’s Commander 1000. “We were getting ready for the flight, and I told Ed I would sit right seat and follow along,” Kimball says. “He shoved me in the left seat and told me, ‘It flies like a big Apache,’ which is what I used for my multiengine rating.” The demo flights were convincing, and Worrell spent a month finding a nice 690B for Belt Tech.

After his simulator training Kimball went back to Eagle Creek to fly with Maher, as required by the insurance underwriter. Maher was impressed with Kimball’s skills, and fast-tracked him to Commander solo status.

The transition was easier than going from the Piper Warrior to the Saratoga, according to Kimball. “Power management is easier,” he says. “No shock cooling, no adjusting the mixture. Just set the power and forget it.” Maintaining strict directional control on the initial takeoff run, staying ahead of the airplane’s speed and climb performance, and achieving consistently smooth landings all took some attention at the beginning, but the usual bugaboo of Commander novices—ground handling—was not an issue. “I had a bit of tailwheel time, which evidently helps transitioning Commander pilots anticipate steering commands,” Kimball says. “The steering system is an awesome part of the airplane. I love it!”

Being the pilot, a member of the Belt Tech family and a certificated mechanic gives Kimball a well-rounded perspective as aircraft manager. “Knowing the family is on the airplane means we want to spare no expense in maintaining it,” he says, “but on the business side we say let’s be practical about it.” Meanwhile, his maintenance experience allows him to talk the talk with Eagle Creek technicians. “I ask their opinion, and they have been very balanced. The guys in the shop, especially John Fogle, are great, and I feel like their service is exceptional.”

Along with giving the airplane credit for his quick climb into turbine-powered business flying, Kimball also salutes the instruction he received at crucial junctures in his training. His primary instructor, Steve Johnson, was second on American Airlines’ seniority list when he retired, and his instrument instructor, Doug Carmody, was a retired USAirways check pilot. And then there was Maher to help with the launch into the turbine world.

“I feel I have been extremely lucky to have had veteran instructors with real-world experience who would tell me exactly like it is when I messed up. That’s had a big impact on how I fly.”

Using airplanes, and especially the Commander, has had a big impact on how Belt Tech does business. “We need to be face-to-face with our branch managers, our employees, and our customers,” Kimball says. “That’s where an airplane has helped. We could do trips by driving, but it would be one a week. Now we can run our business like we want and still have time for family.

“The expense of operating the airplane is negligible when you consider the time we can spend with our employees and our customers, and still have our people at home at night. We’ve built our company culture around that.”