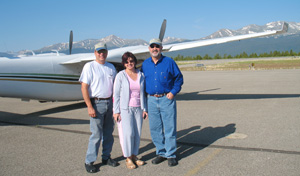 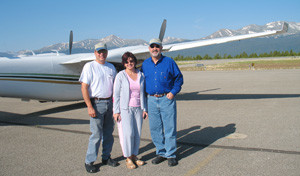 Chick Gregg likes airplanes. He has owned and flown several including a Bonanza, Baron, and Piper Navajo Chieftain. But with the pressures of his central Florida land-development and home-building business mounting, he put flying aside and sold the Navajo. That was 15 years ago. Fast-forward more than a dozen years. The company, owned by Gegg and four partners, was now building hundreds of new homes annually. They were successful. It was time to enjoy life. So, they sold the business to a public company. Gregg pursued his passion for road racing. He also bought another Navajo, a Colemill Panther conversion. Gregg had arranged with Richard Hardoon, an Embry-Riddle graduate and former Navy A6 pilot who had a growing aircraft sales and management company at Sanford, Florida, to manage and fly the Navajo. Then Gregg bought a vacation home in Colorado, a decision that prompted a reassessment of the Navajo's mission. "We needed something faster and higher-flying to get out there," Gregg says. They surveyed the field for candidates, but there was never any doubt about where the search would lead. Hardoon had experience in a Twin Commander and was a believer in the TPE331's performance, reliability, and economy. Gregg had shared a hangar with a Commander owner, and knew of the marque's reputation. They began looking at several examples, and eventually found N20MA, a 690B (s/n 514) with the Dash 10T engine conversion. The owner flew it to Lakeland, Florida, where National Flight Services did a pre-buy inspection (and now services the airplane). Soon Gregg was a Commander owner. The Navajo had spent months in the shop to bring it up to Gregg's standards. He didn't want to go through the same process with his next airplane. "I wanted something I could start flying pretty quickly," he says. N20MA came with nice paint and interior, a Garmin 530/430 combination, and a Honeywell KMD-850 multifunction display. Gregg and Hardoon compete for the title of ultimate gadgeteer, so the Commander has since benefited from a few technological enhancements. The two Garmin navigators were traded for new WAAS-approved models, and cockpit additions include a Garmin 496, GPS roll steering (turn anticipation), and a tablet PC with electronic charts. They've made half-a-dozen trips to Colorado, and although the nearly 1,400-nmi flight requires a fuel stop, it still goes quickly thanks to TPE331 power. "With the Dash 10s it's fast -- one of fastest out there, and it's pretty economical to operate," Gregg says. Hardoon says he regularly sees 305 to 315 knots true airspeed at Flight Level 270 and fuel consumption ranging from 515 to about 550 pph, depending on ambient temperature. The Dash 10T's power reserve has proved beneficial in situations other than in cruise flight. On one trip out west they landed at 9,927-foot-high Leadville, the highest airport in North America. "The Commander did just fine," Hardoon shrugs. Gregg has since brought in a partner, and together they are expanding the fleet. Their first partners' purchase is a Citation III. It will assume the Colorado mission while the Commander will range throughout the eastern United States. Gregg, who rides up front in the Commander, plans to reactivate his certificate, and he's looking forward to flying the Commander. "With that big wing it's a good, safe, all-around dependable airplane," he says. "Aircraft that have been upgraded are very solid," Byerly says. "Buyers want an aircraft that has been taken care of and upgraded." As an example he cites a 14,000-hour 690B that had undergone a Grand Renaissance conversion in 2000, had mid-time Dash 10T engines, and featured numerous cockpit and cabin upgrades. The airplane sold recently for just under $1 million. "It's difficult because of the relatively small quantities involved in the manufacture of aircraft parts, yet the rigorous quality control that must be exercised," Matheson says. "But, as the trim flex cable example demonstrates, we've been successful."