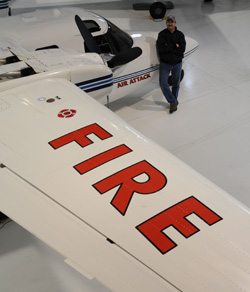 goldman Brad Goldman has been fighting fires for most of his adult life. It's his passion, and for the past nearly 30 years his job, too—he's with the Snohomish County Fire District 7 in Washington State, north of Seattle. Some 25 years ago he learned to fly, and it, too, became a passion. Which explains Goldman's summer job: fighting fires from the air.

Goldman owns and operates Gold Aero, Inc., based in Arlington, Washington. His two-airplane fleet—a Cessna 205 and Twin Commander 500S Shrike—function as aerial supervision aircraft over large wildland fires. An air attack supervisor in the airplane controls the airspace over the fire, and makes tactical decisions on what type of aerial resources are needed to support the ground crews battling the blaze. Air attack aircraft serve a critical function in the high-stakes effort to contain raging, fast-moving wildfires.

Goldman founded the business 11 years ago with the 205. A few years later he heard that his primary customer, the U.S. Forest Service, was going to require that its contractors fly only multiengine aircraft, so he began to research the options. A high wing is an obvious attribute given the need for good all-around visibility on an air attack aircraft. That narrowed the choices down to the centerline-thrust Cessna 337 Skymaster; the Partenavia, a fixed-gear piston twin built in Italy; and Twin Commanders.

He asked air attack supervisors for their preferences. “Most said that their first choice is a Twin Commander,” Goldman said.“The only thing I knew about Twin Commanders was that Bob Hoover flew one. So I started learning about them.”

That effort lasted two years, and eventually led him to San Jose, California, where he found the second-to-last Shrike Commander that Rockwell built. Although it had only 3500 hours on the airframe, it was nowhere near ready for active duty fighting wildfires. In fact, it was already well into retirement. The engines, props, and landing gear all needed overhauling; the avionics were outdated; and the paint was oxidized. Goldman bought it. “We spent a full year-plus going completely through the airplane, making it better than new,” he explained. “It was a lot of work, but now it's a good airplane, very reliable.” Most important, “the Forest Service folks really enjoy flying in it,” Goldman added.

goldman Last year was the Commander's first full season as an air attack aircraft. A typical mission has the pilots reporting for duty early in the morning at a temporary base for the airplanes and helicopters involved in battling a blaze. All pilots attend a briefing to review weather forecasts, the status of the fire and its predicted “behavior,” safety issues, and the plans and objectives for the day. Then it's time to preflight the aircraft, meet up with the air attack supervisor who will be in the right seat and possibly a trainee-observer, and launch.

“We're usually the first one over the fire,” Goldman explained. “We look for changes in the fire lines that occurred overnight, and relay that information to the fire bosses on the ground.” The air attack supervisor also communicates with crews on ground who have just arrived on scene, and calls in other ground-based resources. All the while directing tanker aircraft and making sure no uninvited airplanes jeopardize safety.

goldman The air attack supervisor also monitors flight times of each aircraft to ensure they have adequate fuel for the mission, and calls in replacements to allow for refueling. The objective is to avoid any gaps in the firefighting effort.

The Gold Aero Commander has long-range tanks (223 gallons), but Goldman said they don't usually depart with full fuel. That's because they typically fly for about four hours at a time, and most of that is spent loitering over the blaze with the power set at 16 inches MP and 2200 rpm for reduced fuel flows. The aircraft is equipped with a fuel totalizer and engine analyzer. Most days they fly one sortie in the morning and one in the afternoon, for a total of eight hours. “If it's a big fire we use two air attack aircraft,” Goldman explained, “with one flying in relief.”

The Commander does not have air-conditioning. “I’m flying Forest Service guys around who are pretty tough,” Goldman said. “But there's enough air flow in the cockpit when we're flying two-to-three-thousand feet over the fire.”

goldman Sometimes there's smoke in the cockpit as well. “That was one of weirdest things I discovered when I started doing this—flying and smelling smoke, and it’s normal,” Goldman said. “But it’s woodsmoke, not smoke from an electrical or gasoline-fed fire.

“You have to fly in smoke when you're fighting fires, but if you can’t see through the smoke it's not wise to fly through it,” he added, especially since they're typically flying over hilly or mountainous terrain. “What you want to avoid are the large thermals, large columns of smoke. Most people have no concept of the power and energy in a large fire. I've seen smoke columns from a fire go up to 35,000 feet. They make their own thunderstorms. I've seen tree limbs go past the aircraft in a smoke column.”

Because they fly often in smoky conditions, Goldman changes air filters every 50 hours and washes the aircraft frequently.

Goldman splits the air attack flying in the Commander with one other pilot. “It's a real treat to fly the Commander,” he said. “It's a solid, tough airplane, and I very much enjoy flying it. It's very forgiving as far as high-performance twins go. It’s a good airplane, and perfect for the mission. And it gets a lot of attention. People look at the airplane and ask questions about it.”

Goldman said he is happy with his decision to buy and refurbish the Shrike. “The last tactical group supervisor I flew with said it's the best air attack airplane he’s been in. It's comfortable, and the visibility is outstanding. And if the customer is happy, I’m tickled!”