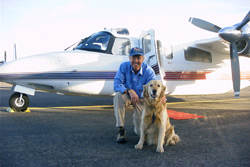 ONE MORE REASON TO LIKE A COMMANDER: IT’S DOG-FRIENDLY

Bill Johnson bought his 690C model 840 for reasons that any Twin Commander owner will recognize. The first is performance, and because he lives in Aspen, single-engine performance is as important to him as the impressive numbers for two-engine climb and cruise. Then there’s the ability to get in and out of short fields; confidence-inspiring handling; and great visibility for pilot, passengers, and canines, too.

That last attribute means something, because a Golden Retriever has been Johnson’s constant passenger and sometimes copilot.

He had his first Golden Retriever when he had his first airplane, an A36 Bonanza. “He loved flying. He would be up on the wing of the airplane before me, waiting to get in the cabin,” Johnson says.

target“The Bonanza was a great airplane, but coming in and out of Aspen and the type of flying we were doing, I decided I needed a twin,” Johnson says. He looked at piston twins and quickly concluded that, except for the Aerostar (like the Twin Commander, a Ted Smith design), single-engine climb performance in a piston twin departing 7,820-foot-high Aspen in the summer is a contradiction in terms.

He shifted his gaze to turboprops, and eventually narrowed his search to Twin Commanders. A demonstration flight in a Dash 5-powered 690A sold him. “It was the end of August,” Johnson remembers. “I had never flown a turboprop, and it felt great. But after one takeoff I remarked to the demo pilot that we were only climbing at about 950 fpm. Before that we were getting about 2,500 fpm in the climb. What’s wrong? He said that while I was looking around the panel, he pulled the power back on one engine and trimmed out the yaw. ‘You’re flying on one engine,’ he told me. That’s when I decided on the Commander.”

Early in 2000 he bought an 840 with Dash 10T engines and had it renovated from nosecone to tailcone “with just about everything new, the best avionics package you could put together,” plus Hartzell wide-chord props. “It’s an awesome airplane,” he says. “Very fast. I can always count on cruising at over 300 knots— 305 to 312. Other 840 owners have flown it and remarked how fast it is. And it sips fuel compared to other aircraft”

Johnson flew with several experienced Commander pilots to get comfortable in the 840, and on one trip to California they landed on a friend’s 1,900-foot-long strip. “We touched down on the end of the runway, hit the brakes, and went to full reverse. I could not believe how quickly we stopped. We still had most of the runway to taxi down to get to parking.”

Once he began flying the 840 solo, Johnson’s constant flying companion was his second Golden Retriever, Target, who had enjoyed notoriety as the cover model on boxes of Ken-L-Ration dog food. To protect Target’s hearing, Johnson had a special Snoopy-style cloth flying helmet modified to hold a Bose noise-canceling headset in place.

“Target was enthusiastic about flying,” Johnson says, “but he didn’t much like the helmet I made him wear. I think he was afraid another dog would see him in it.”

A few years ago Johnson met and began dating Debbie Norden, and the Commander played a role in their eventual marriage. “We had arranged to meet in New Orleans, spend a few days there, then fly home in the Commander,” Johnson says. “Coming home—her first time in the plane with me—we took off and were climbing through about 19,000 feet when I heard an air noise. I thought the nose gear had partially extended, and sure enough I saw that I was losing hydraulic pressure. I told Debbie we had a hydraulic failure, needed to do an emergency procedure to put the gear down, and may or may not have brakes and flaps. We could either land at Baton Rouge or go back to New Orleans. She looked at me calmly and without hesitating said, ‘I really liked that restaurant we went to in New Orleans last night. How about eating there again tonight?’ That was when I knew she was the woman for me.”

They married in December 2006, and the three of them—Bill, Debbie, and Target—began flying together in the 840. Johnson fabricated a harness that kept Target secured to restraining belts, yet allowed him to lie down in the aisle just behind the crew seats.

Johnson says he deliberately changed his lifestyle from that of a workaday corporate executive—he was Chairman and CEO of Scientific Atlanta, a Fortune 500 company and before that ran his own consulting firm specializing in corporate turnarounds—to living in Aspen and enjoying the natural world. Both he and his wife love outdoor sports—skiing, snow shoeing, hiking—and many of their Commander trips are in pursuit of that love as well as for a variety of business and non-profit activities, including occasional help to managements dealing with challenging situations.

He has the 840 maintained both at Legacy Aviation Services near Oklahoma City and by Executive Aircraft Maintenance in Scottsdale, which is near a second home in Sedona. He’s also used Western Jet Aviation in Los Angeles. Having lost engines twice in T-34s many years ago, he is admittedly demanding on maintenance, and says of the service centers he done business with, “they’ve all given me terrific support.”

Tragically, Target was involved in a freak accident earlier this year and lost his life. It was a traumatic event for Johnson, his wife, and Johnson’s young granddaughter, Sydney, who often travels with them. They created a photo collage “celebrating Target’s life, and life with Target,” and sent it to friends.

“Target was 13 and in great health when he died,” Johnson says. “We were getting ready to go snow shoeing when it happened. He had a great life.”

The breeder who provided Johnson with Target gave them another Retriever for a few months to help ease the loss. “He loved looking out the windows of the Commander,” Johnson says. That dog has since gone back to its owner, and Johnson looks forward to bringing another Golden Retriever into the family, this time as a permanent member of the clan, and crew.