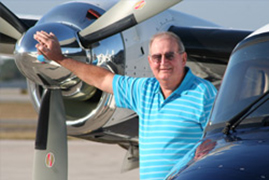 We all know professional pilots who have grown jaded with flying. What began as a passion became, over time, nothing more than a job, and if you listen to their complaining, a not-very-satisfying job at that. You won’t hear such complaining from Bill Borchert, a former Air Force instructor pilot who retired in September 2002 from what he calls a “terrific” career at Delta Air Lines. How is he spending his retirement years? He probably would say “What retirement?” and with good reason. Borchert is part owner of a primary flight school, and personally instructs students in a turboprop twin. He also shuttles between flight school, extended family, and winter retreat in a beautiful Dash 10T-powered 690A Twin Commander.

A native West Virginian, Borchert enrolled in the Air Force ROTC Flight Indoctrination Program while an undergrad at West Virginia University in Morgantown. After 40 hours of instruction he got his Private certificate, and upon graduating was awarded a regular commission in the Air Force.

He was assigned to Craig Air Force Base near Selma, Alabama (now Craig Field Airport—KSEM), as an instructor teaching undergraduate pilot trainees to fly the T37. After five years of service he resigned his commission, and soon after was hired by Delta. His first assignment was as a flight engineer on DC-8s flying out of New Orleans.

In September 1980 he was a passenger on a Delta flight en route to Atlanta, where he was to take regularly scheduled training, when two passengers hijacked the airplane to Havana. It was a cordial arrival in Cuba. The airport opened up its restaurant, and Borchert and fellow passengers enjoyed a good meal. “We got that out of the way, and flew back to Atlanta,” he says. Once there he decided to meet a Delta flight coming in from Columbia that was going on to New Orleans. Ironically, it, too, was hijacked after leaving Columbia. Borchert says the rest of his 32-year career at Delta was, thankfully, “uneventful.”

bob mays twin commander Over the next three decades Borchert flew just about every model airplane in Delta’s fleet, culminating in the Boeing 767-400. In his off time he invested in various projects, including hotels and real estate. After retiring from Delta he invested in a flight school, Falcon Aviation Academy, based at the Newnan-Coweta County Airport in Newnan, Georgia, with bases at Atlanta Regional Airport-Falcon Field south of Atlanta, Dekalb-Peachtree Airport north of Atlanta, and Athens/Ben Epps Airport in Athens, Georgia.

Borchert soon found himself doing more than just managing his investment. As part of a training package involving airline-sponsored students from China, Falcon gives each student 10 hours of high-performance instruction in a King Air E90. When the school needed another instructor qualified in the King Air, Borchert agreed to help out.

Borchert owns one-third of the King Air, which also is used for charter flights. Along with its use for instruction and charter, Borchert occasionally flew it to visit family in West Virginia, Louisiana, and Texas; on golf outings; and to commute to a home in Southwest Florida. Meanwhile, he began to develop an interest in Twin Commanders. “People told me about its weight-carrying capability, ease of handling, and the low cost of operation,” he says.

That interest eventually led him to Eagle Creek Aviation Services, where in November 2008 he purchased N75U—a 690A powered by TPE331-10T engines and equipped with a full Meggitt Magic glass panel including pilot and copilot EFIS displays and an electronic engine and systems instrumentation display. Borchert had the airplane painted and the interior refurbished, and the result is a beautiful, capable, high-peformance ride.

The pillows in the passenger cabin are embroidered with a “TAC Air” logo. “It stands for Take A Chance,” Borchert laughs, then lays the blame squarely on his son. “He came up with it.”

bob mays twin commander The differences between the King Air, which has been retrofitted with Dash 10 engines—and the Twin Commander were immediately evident. “On a trip from Falcon Field to Ft. Myers, Florida, the King Air averaged 100 gph block-to-block,” Borchert says. “The Twin Commander on the same route burns 85 gph and flies 25 knots faster. In the winter it cruises at 300 knots, and 285 knots in summer. It’s an efficient flying machine.”

Given its performance and cost-effectiveness, the Twin Commander is proving to be a good investment for Borchert. Owning a large flight school may be a riskier venture, but Borchert, who is approaching his 50th year as a pilot, says the decision to invest in the school was at least partly based on other factors, chief among them a continuing passion for flying. “In aviation,” he says, “heart overcomes intellect.”