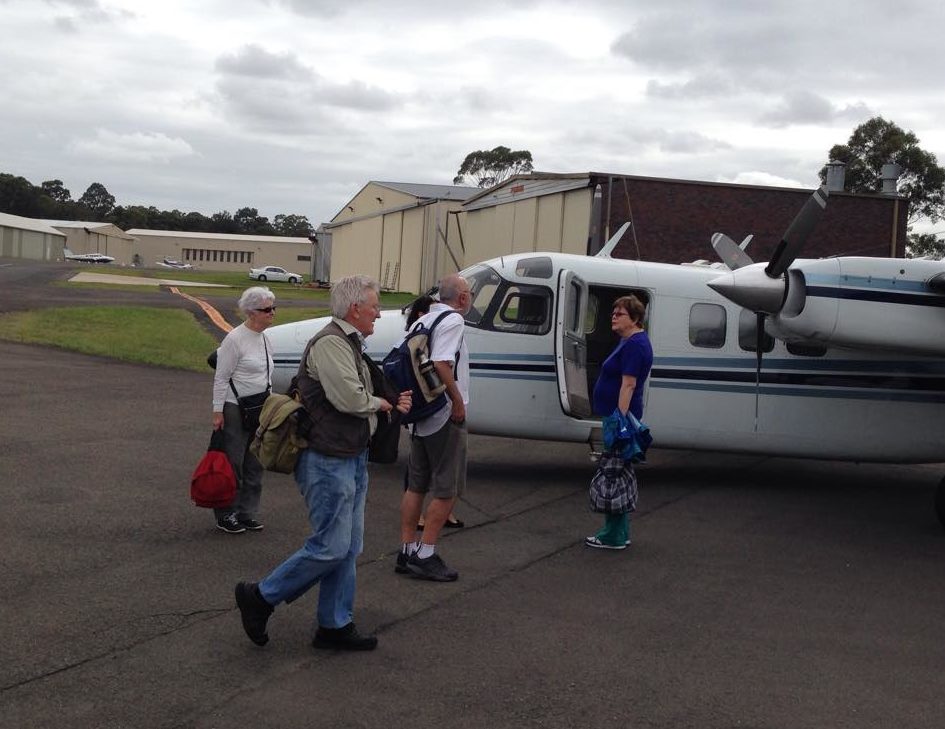 Australia may be the world’s smallest continent, but it’s the world’s sixth largest country and the largest island country. How best to get around that big island? According to John Ives and his customers, the preferred method of travel is a model 685 Twin Commander.

Those names may not mean much to non-Aussies, so Ives tries to put it in context. “I guess you’ll have to get out an atlas to see the extent of the flying,” he says, “but to put it into perspective using the USA, we are flying from, say, New York to Florida and across to Arizona and then back to New York, and then flying from New York across to LA and back, with various stops in between.”

All of Heron’s tours are inclusive—they include the flight, accommodations, meals, transfers, etc. “In Europe they do bus tours,” Ives says. “This is the same thing except that instead of using ground transport we are using an airplane to get from A to B. There is not much to see in the interior of the country, so we cover ground efficiently. At the destination we use a local tour operator.”

In fact, he was planning to introduce the same tour concept—take a small group of tourists to many interesting destinations using a multiengine airplane—in the United States, flying from Seattle up to Alaska and back. But before he could implement the plan the exchange rate changed, devaluing the Australian dollar in comparison to U.S. currency, and he shelved the idea.

Heron Airlines got its name because Ives used four-engine de Havilland Heron aircraft, one of which was an original Gipsy Queen-powered version (six-cylinder 250 hp engines) when he founded the company in 1991. “They were great aeroplanes,” Ives says. “Passengers loved the four engines. Little did they know that it needed all four to stay in the air, at least the Gipsy-powered one.” Pressurized by regulators who were not fans of older commercial aircraft, Heron switched to Piper Chieftains.

Since founding the company Ives has sold it and bought it back four times.

Why a 685 Commander? After Ives sold Heron Airlines for the third time, he and a partner formed an aeromedical transport company specializing in infant transport, and began operating with a Piper Mojave. However, they found that the Mojave’s range didn’t suit the company’s long-haul nonstop mission. “Sydney to Adelaide was a 650-nmi flight,” Ives explains, “and with the Mojave we had to stop to refuel. It made life difficult.” So he replaced the Mojave with the 685. “It’s pressurized, fast, reasonably cheap to operate with piston engines, and has good range. The 685 could do Sydney to Adelaide nonstop in reasonable time.”

The aeromedical transport venture eventually “did not work out,” Ives says. Meanwhile, the owners of Heron Airlines were struggling, so Ives saw an opportunity. He bought Heron back and began touring in the 685.

“I rather like the aeroplane,” Ives says. “It has its moments, and problems, but I’m solving them.” Passengers “absolutely love it,” he adds. “Most are in their seventies and eighties. When we were operating Chieftains they had to climb stairs to get in the aircraft. The 685 makes it nice and easy. And it’s unbelievably quiet. It’s very much a plus for passengers.

“And it’s a high wing. We don’t operate it pressurized because most passengers expect to look at the ground. We are on an air tour, after all, so we fly at 7,000 to 8,000 feet. If we’re doing a long haul we have to get it to altitude, but it takes a lot of fuel.”

Heron’s pilots, most of whom are retired from airline cockpits and who fly the 685 single pilot, use a 55-percent power setting on trips. “They operate on a very strict set of guidelines to get the max out of the engines,” Ives says. “It’s much better to operate at low power settings because we end up with full TBO on the engines. We haven’t had a single cylinder problem in 600 hours on the aircraft. Compressions are as good as day it was built. It comes down to how you operate the airplane, and we operate it strictly by the book—as former airline pilots they are used to that. It’s definitely not an airplane you would employ a young kid on.”

A pilot, Ives concentrates on operating the company rather than flying the tours. “I can’t do both,” he says. “I occasionally donate an Angel Flight, and I do the flying if it’s a decent day.”

The company is successful with the 685, Ives says. The airplane logs about 500 hours a year, according to Ives, which probably makes Heron Airlines the premier 685 operator in the world. Certainly a 30-flight-hours tour is a distinguishing achievement. “It’s probably a record for a 685 these days,” Ives says with some understatement.