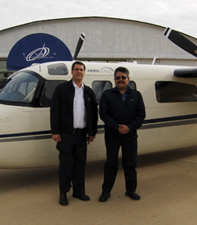 WHEN IT’S HOT AND VERY HIGH, TAKE THE TWIN COMMANDER

Some say that flying is all about the takeoffs and landings. What happens in between those events is the easy part. Eldo Todesco would agree.

Todesco flies a TPE331-10T-powered 690A Twin Commander for Aero Lipez, a Bolivian-based commercial operator that provides air transportation services for mining companies. Aero Lipez’s milk run—Todesco and copilot Luis Osorio make the trip almost daily—is from the company’s base in La Paz to a mine in the Potosi district in extreme southwestern Bolivia.

It’s just a 1-hour 5-minute flight, but the interesting part is the takeoff. The elevation at La Paz’s El Alto International Airport is 4,061 meters or 13,325 feet MSL, making it one of the highest commercial airports in the world. (Qamdo Bangda in Tibet is the highest at 4,334 meters/14,219 ft.)

Departing El Alto’s 13,123-foot-long runway is just the first flight planning challenge for Todesco. Next up is the landing. The destination airport is a gravel strip located at a large lead, zinc, and silver mine in San Cristobal, just south of the largest salt lake in the world. The mining strip measures 2,600 meters by 20 meters/8,530 feet by 20 meters/65 feet and sits at an elevation of 3,754 meters/12,316 feet MSL.

Operating out of extremely high-elevation airports, one of which is unimproved, is a prime reason Aero Lipez has operated a Twin Commander since 2004, according to Todesco, who also serves as operations manager for the company. “The Dash 10T-powered Commander is the airplane that can do the job at that altitude,” he says.

Todesco uses special charts supplied by Twin Commander that provide takeoff performance up to 14,000 feet. “The great advantage is the charts were designed for Dash-5 powered airplanes, and the Dash 10T engines deliver more power producing better performance,” he says.

Given the altitudes and latitudes of La Paz and the mining strip, Todesco and the three other pilots who fly the Twin Commander for Aero Lipez have to deal with ambient temperatures ranging from –8 degrees C in winter to 21 degrees C in summer. Weather ranges from windy and cold in the winter to summer thunderstorms.

Even on the hottest summer day, maximum takeoff distance at the two airports is about 1900 meters/6,234 feet, or 700 meters/2,300 feet less than the runway length at the gravel strip. Normally the Aero Lipez Twin Commander has five passengers and two pilots aboard, but on hot days takeoffs are limited to four passengers and 2 hours 15 minutes fuel. “We follow the charts and IFR rules and there are no problems,” Todesco says. “We never get to those limits.”

The Twin Commander is the only airplane authorized to operate out of the mining strip at night in the event of an emergency. The mining company also takes advantage of the Twin Commander’s ground visibility from the passenger cabin to fly geologists who scout the landscape for mineral deposits and potential new mine sites.

The company has in-house maintenance capability, but also has a long-standing relationship with Legacy Aviation Services in Yukon, Oklahoma. Legacy technicians have flown to La Paz to do specialized maintenance on the Aero Lipez Twin Commander, including converting it to Woodward Fuel Control Units. Late in 2008 Todesco and another pilot, plus a company mechanic, made the five-leg, 15-hour flight from La Paz to Legacy to have several major service bulletins, airworthiness directives, and inspections performed on the airframe, hot section inspections on the engines, and avionics upgrades in the cockpit. Legacy also installed the new Fuel Quantity indicating system, painted the airplane, and installed a complete new interior.

“We have full confidence that Legacy is delivering,” Todesco said after test-flying the finished airplane before returning to La Paz. “We’ve been here twice to check on the airplane. It is on schedule—no delays. The airplane is working well.”

Why Legacy? “They are always available,” Todesco says. “We can reach them whenever we want—Saturdays, Sundays, holidays. They have very well trained, very good technicians, and they always have good solutions. We have not had one problem. They have great support.”

Todesco appreciates the fact that Legacy doesn’t automatically replace a problem part with a new one. With cost in mind, “They suggest options,” he said. When a new part is warranted, he likes that Twin Commander Aircraft provides it through Legacy. “When you buy parts for an airplane, you want to know where the part comes from,” he explains. “Having guaranteed parts is very important. The most important thing for this company is safety. Safety, security, and then cost.”

When the president of the mining company’s parent firm is in Bolivia to inspect the mine, the Twin Commander “is the airplane he uses,” Todesco says. “The high-level executives fly on it. They trust that Commander.”