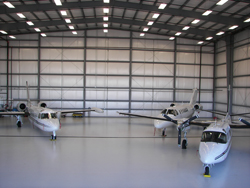 AC ExpressIt's not easy to make a profitable go of it in aircraft charter, especially in these recessionary times. Along with competitive pricing, efficient management, and strict cost controls, you have to have the right aircraft for the job. Robert “Jake” Wilburn figures he has just that in a pair of hard-working Twin Commanders.

Wilburn owns and operates AC Express Inc., an aircraft charter and management company based in Fairmont, West Virginia. The company owns a 690A and leases a 690B, and manages a Citation CJ2+, Westwind I, and King Air C90B. The charter fleet is comprised of the two Twin Commanders.

Wilburn has been flying for 44 years and managing airplanes “before it became popular.” He founded AC Express in 1988 in Morgantown with an early serial number Citation 500 and a Piper Mojave. The fleet changed and grew with the times. In 2003 one of his management customers decided to set up its own flight department and bought all of Wilburn's aircraft, but not the charter certificate.

“If I had any sense I would have taken the money, bought a little house in Florida, and retired,” Wilburn chuckles. Instead, he took over the small FBO at little 4G7, Fairmont Municipal Airport-Frankman Field, situated between Morgantown and Clarksburg in the northern part of the state. He founded a flight school, bought a Cessna 414, and started all over again with AC Express.

AC ExpressAs northern West Virginia and neighboring southwestern Pennsylvania transitioned from a traditional industrial-based economy to one incorporating high technology, Wilburn’s charter business grew and with it the need for more capability. “The client base demanded more performance,” he says. “The leg segments were getting longer, and folks wanted to be able to serve their customer base. We needed to go higher, farther, and faster.”

Wilburn had experience with Twin Commanders. In 1971 he flew the first 681T delivered by the factory. Later, he filled in for a pilot flying a 690B for the owner. In 2004, when he sought to upgrade the AC Express fleet with something more capable than the 414, he concluded that a Twin Commander would best serve those needs “because it does all of that quite well.” His search for a candidate led him to the same 690B he had flown years earlier. The airplane was still in the hands of the original owner and had just over 1000 hours total time since new. Wilburn leased it from the owner and put it on the charter certificate.

Three years later, with business on the increase, he went looking for a second Twin Commander for the charter role and found a 690A undergoing an inspection at Winner Aviation, a factory authorized Twin Commander Service Center located in Vienna, Ohio. Wilburn bought the airplane.

“Twin Commander was the logical choice for us,” Wilburn says. “It has the same cabin volume as a King Air 90 but goes faster on about same fuel. In fact, it has about the same cruise speed as the King Air 200 but on about 35 percent less fuel.

“It’s an excellent airplane,” he continues. “An absolute rocket ship. We fly to a lot of small communities with short strips, basically your 3,500-foot-long by 75-foot-wide runway. With about 1500 pounds of fuel on board it will operate out of just about any airport here in the Appalachians and actually make the numbers. We get a tremendous amount of flexibility out of the airplane.”

Most of the charters are for business purposes, Wilburn says. “These are not golf outings. We’re carrying guys to mines, wells—whatever. They are working flights with relatively short stage lengths and long waiting times for the pilots at these small-town destinations. The pilots may have to sleep in a rental car, but we’re going to get these guys where they want to go.”

AC ExpressAC Express is authorized to fly the Commanders single-pilot on Part 135 flights, but Wilburn prefers two in the cockpit. “My philosophy is that the cheapest insurance policy you can buy is another pilot up there. We do a lot of northeast operations—Philadelphia, Teterboro, Washington-Dulles—and it gets busy. It helps to have another set of eyes. Same for flying into and out of short strips in the mountains.”

Winner Aviation serves as the Director of Maintenance for the AC Express Commanders. The September 2009 issue of Professional Pilot included a report on maintenance and repair operations (MRO) used by business aviation, and AC Express pilot Robert Waldron was complimentary of Winner’s work.

Winner is the “service base of choice” for most of the AC Express fleet, Waldron wrote in a letter that was published as part of the Pro Pilot MRO report. “They are a well-established facility that provides expert diagnostic ability and repairs for our engines…as well as service for our airframes and avionics. They’re outstanding at performing complex installations and they understand how critical it is to get the service done on time. Winner Aviation is superb. I salute the entire staff from those in the front office to the hard workers on the shop floor.”

At their peak the two AC Express Twin Commanders were averaging 35 to 40 hours a month combined flying time, according to Wilburn. As his customers reacted to the downturn in the economy by cutting back on travel, Wilburn’s business suffered. At the beginning of 2009 flying time had plummeted 54 percent compared to a year earlier, but Wilburn has since seen most of his customers return to the air.

“It looks like we’re back up to the flight time and number of trips we did in 2008,” he says. Credit Wilburn’s competitive pricing, efficient management, and sharp pencil, plus a pair of capable, hard-working airplanes.