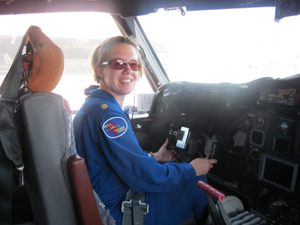 It’s late February, a bit northwest of Caribou, Maine, and a lone Commander 1000 JetProp, wearing the livery of the National Oceanic and Atmospheric Administration (NOAA), lopes along at 110 knots just 500 feet above the trees. No, they’re not searching for a downed aircraft or lost hiker. This NOAA Commander is using sophisticated instrumentation to measure the water content of snow packs. And it’s the perfect airplane for the mission.

Using sophisticated Airborne Gamma Radiation equipment, the NOAA Commanders—they also operate a Shrike—fly above snow-covered regions in the U.S., southern Canada, and Alaska to measure both the water contained in the snow and the saturation level of surrounding ground moisture. The information is then relayed back to the National Weather Service and NWS River Forecast Center. When the spring thaws come, they can get a head start on spotting areas that may be prone to flooding.

NOAA started doing aerial snow surveys in 1978, and has been using Twin Commanders since the early 1980s when they put their first Shrike Commander into operation.

“The Commanders are the perfect airplane to meet the mission profile we fly,” LCDR Martin said. “They have excellent slow-speed handling qualities and their high wing is very beneficial flying close to the ground. We always fly VFR with our eyes outside. The visibility is great.

“We take a lot of photos during a mission,” she said. “The copilot will take pictures of anything of hydrological importance whether it’s a river, snow build-up, an ice jam or whatever may be of interest to the researchers. The high wing and large windows are great for that.”

LCDR Martin said that the Commanders fit NOAA’s profile so well that the agency upgraded their older 690A to a 695A JetProp 1000 in 2005.

“It was built in 1984 and has 7,000 hours on it now, but it was the newest and greatest at the time,” she said. “When we took ownership we did a complete upgrade. We stripped it down and refurbished it to our needs.

“When we redid November Forty-Five Romeo Foxtrot, the Meggitt EFIS was the newest and best system going into the Commanders at the time. Because we fly so low, we were looking to provide our pilots with the greatest situational information available in the flight station (cockpit),” LCDR Martin said. “The Meggitt system delivered that for us. We also have dual Garmin 530s and a Honeywell MFD.”

She pointed out that the Commander also has electronic engine displays, which makes easier than the standard electromechanical gauges.

“Situational awareness is critical at the altitudes and speed we routinely operate at,” she said. The NOAA Commanders fly so low and slow that the crews routinely turn off the aircraft TAWS, so knowing what’s outside and ahead is critical. LCDR Martin also explained that the crew’s situational awareness and overall mission accuracy is aided by the use of FalconView mapping software.

“We have a separate monitor mounted between the pilot’s and copilot’s seats for the FalconView. We can display our flight lines and then visually follow them on the terrain below. We can verify valleys, roads, rivers—landmarks like that,” she said. “We are flying low and VFR so we are out the window all the time. The MFD is just to make sure we’re turning on the right landmark. The copilot operates the survey equipment so they know when to start and stop the lines based on the moving map.”

Along with the opportunity to upgrade the flight station, the move up to the 695A JetProp 1000 also gave the NOAA flight crews the added safety benefit of the Dash 10 engines. “It certainly doesn’t lack for power,” LCDR Martin said.

LCDR Martin, who also flies a NOAA WP-3D Orion, has been flying the Commanders since 2002. With more than 2,000 hours in type she has plenty of reasons to love Commanders. “It’s a great airplane. I feel very comfortable flying at 500 feet AGL because of the stability and performance,” she said. “You don’t want to be down low and question the climb performance of the aircraft in the event you lose an engine. I know this airplane climbs and performs very well on one engine.”

Fortunately, LCDR Martin’s experience with single-engine operations has been limited to recurrent training exercises. She has not had to shut down an engine on the JetProp during any mission.

As you would expect, the JetProp’s cruise speed is another attraction. “It’s fast. A lot of the times our missions are dictated by recent weather. We can be in New England and need to get to Minnesota because of heavy snowfall. The Commander gets us there quickly,” she said. “It also can take us above the majority of the winter weather. It performs great at flight levels.”

She also said she loves the flight station in 45RF. “We have 11 displays—all the information I need is right there in front of me. There’s noting missing from our flight station display. The Meggitt system also gives us solid backup display capability. If one screen were to fail, you can get everything on the next screen.”

As the agency’s Commander instructor pilot, LCDR Martin also likes the aircraft’s predictability and flight characteristics. “I do all training for our Commander pilots. This season I’m flying with a new copilot and we’ve been doing his first flights in the northeast,” she said. “Most of our new pilots come up from flying piston twins and this is their first experience with a turboprop. Overall the Commander is an easy airplane to transition to. It’s very stable, but it’s a very complex airplane. System training takes time.”

While the Commander 1000 looks like it will continue to serve NOAA’s snow survey mission for many winters to come, its annual “summer vacation” is about to be dramatically reduced. This summer the JetProp is scheduled to take part in another NOAA survey mission for the National Geodetic Survey.

“The GRAV-D (it stands for Gravity for the Redefinition of the American Vertical Datum; you just have to love government acronyms) survey will create a new, more accurate sea-level height reference for the U.S.,” LCDR Martin explained. “This summer we’re going to be doing the Great Lakes region.”

The purpose of the GRAV-D project is to model and monitor Earth’s geoids (a surface of the gravity field, very closely related to global mean sea level) to serve as a redefined zero reference point for surface heights throughout the U.S. Accurate heights are very critical to many scientific programs.

LCDR Martin said that while this is another NOAA survey mission, it will be preformed at an altitude that is more familiar to Turbo Commanders and their owners. “We’ll be doing these flights at 20,000 feet. That’s a great altitude for the Commander, both fuel consumption and performance wise,” she said. “The flight levels are where the Commander is at its best.”